Moving to London: The good, bad and the strange

Obviously as a musician we get to travel more than most, maybe, and for years friends ask me about this place or that.  Usually it's been about my frequent trips back to my family's Motherland of Norway but this past April I moved to London for at least a year.  So far it's been the best move of my life but with any big change there were reservations; word was the food was bad, people aren't very open or friendly, it's expensive, however the pluses far outweigh the minuses.  Let's start with the food.

Actually, the food ain't bad.  I'm not talking typical "English" fare (though I love English breakfast).  Generally speaking it's as easy to find great, diverse food anywhere in London as it is in NYC, if not at all hours.  Japanese, Italian, Indian, Thai, Vietnamese...it's all here.  I do miss the fantastic and varied Chinese choices from my beloved NYC but I'm still searching for that.  I love crumpets, the bread is generally fantastic and there's tons of choices for that, great coffee shops, serious tea of course and if you're in Little Italy in Soho here you have to try Pizza Pilgrim's.  Everyone working there is REAL Italian and knows their stuff.  You may have to wait but it's worth it.  I also really enjoyed Goodfare Restaurant in Camden Town thanks to my buddy Sid Griffin of The Long Ryders.  It's simple, unfussy, solid and inexpensive.  Right down the street from some key landmarks too like the Jazz Cafe and The Green Note folk club where I first played solo in London in 2008.  The Green Note has vegetarian fare and is also excellent.  There's also a magnificent REAL Italian restaurant (and this is coming from someone who's half-Italian) in Lambeth right off the tube station named Cotto.  From the old country.  Pic below of their home made sausage pasta.  Magnifico!  There's a great free improv venue named Iklectik Art Lab a few blocks away that is extremely supportive of the local scene so I will be back to Cotto many times for sure.  Excellent friendly staff. Check out the scene at Iklectik


My favorite "foodie" thing so far in London?  Sunday Roast.  This is a tradition that spans back to after WW2 when it became a regular affair to bond families who were separated by 5 years of tragedy and fighting.  It can contain roast beef, pork belly or sometimes chicken but always with a decent helping of a variety of vegetables (this varies from restaurant to restaurant) and always, always, Yorkshire Pudding and gravy.  This is my favorite meal of the week.  I've tried several highly rated establishments so far for Sunday Roast and oddly my favorite, by far, is one of the Fuller's pubs called Packhorse and Talbot.  Really great.  Meat perfectly cooked, tons of fresh and varied veggies and the best gravy and Yorkshire Pudding yet.  I'll post pics of all the ones I tried at the bottom of this edition of the blog.  I was however extremely disappointed in the other three highly recommended establishments (don't trust Yelp!). While they were all cozy and well appointed visual restaurants, the meat at all three was overcooked, the veggies not p
articularly fresh, weak and paltry compared to Packhorse and Talbot, and all three had horrible, stale Yorkshire Pudding.  Unacceptable!  See photos for captions/locations.

As for the not so great, yes, it is hard to make friends here. It's a little closed off and they are somewhat remote personally which won't come as a surprise to anyone who's been to England. But I was a bit shocked how "unwelcoming" it was.  Here's an example outside the music biz - I was in a shop, Oxfam, a great used shop for charity, when I actually made the woman behind the counter laugh but she caught herself and cut it off as not to appear too "forward" or outgoing I guess.  Weird and funny at the same time. As for the music side of things, I just want to play and collaborate but encountered similar attitudes from my musical peers.  I proposed to do some work with a few people in the free improv scene but in each instance they changed their minds because "they don't know me enough yet".  Had they even bothered to check my musical credentials on the Internet or was it that no one in in their inner group had introduced me?  Anyways, that's fine.  I got over it.  Especially since I fell in with a tremendous group of free improvisors affiliated with the legendary Eddie Prevost of AMM Music.  AMM was at the forefront of the London free scene in the early 60's through today and for my money are the best.  Eddie and the group constantly challenge each other every Friday save August when they take a month off.  Really superb human beings, every one of them.  I've learned more there in 3 months than I did the last 5 years I was in Nashville.  For real.  Funnily enough the other nicest people I've met here are all from somewhere else.  So there's that <g>.  But I do understand I've grown up in a completely different culture, maybe even one that's spent 240 years trying to separate their identity from this one perhaps more than any other, and it will take some give and take on both sides.  I will admit it's helped me grow a little personally and be more tolerant and understanding so for that I am grateful.  If nothing else the British people have a wider world view than we tend to do in America and in my mind that's a very good thing.

The weather is a trip.  Fortunately I like rain because everyone knows how much it rains here but I walked into the rainiest June on record in London.  Sometimes three times a day or more, even when it looks great it changes fast so bring a good umbrella.  The tube is great although laid out like someone was on an acid trip.  NYC goes East-West/North-South but here...sheeesh!  What a mess!  It's taken the entire time I've been here to even start making sense of it and I have a long way to go.  But it's cheap and extremely efficient and I also love the double-decker buses.  There's virtually nowhere you can't get to with a short walk.  The sites are great, the London Bridge, Big Ben, Westminster, but they are LOADED with tourists and I'm not that much of a city sight seer.  But you could have a lot of fun if so inclined in a short amount of time.

BTW-I will be posting a podcast on my personal web page (Ed's website) soon to coincide with a book I'm writing on slide guitar if anyone's interested.  I was fortunate enough to interview a lot of the greats and every one of them was highly entertaining and forthcoming so I decided to start posting them while I continue my research and interviews so I can pass the knowledge along.

I'll also post links to other blogs and websites soon concerning travel, music and food that I dig and by all means please don't hesitate to post questions or comments..

As they say here, cheers for now!
Ed

Packhorse and Talbot (my favorite): 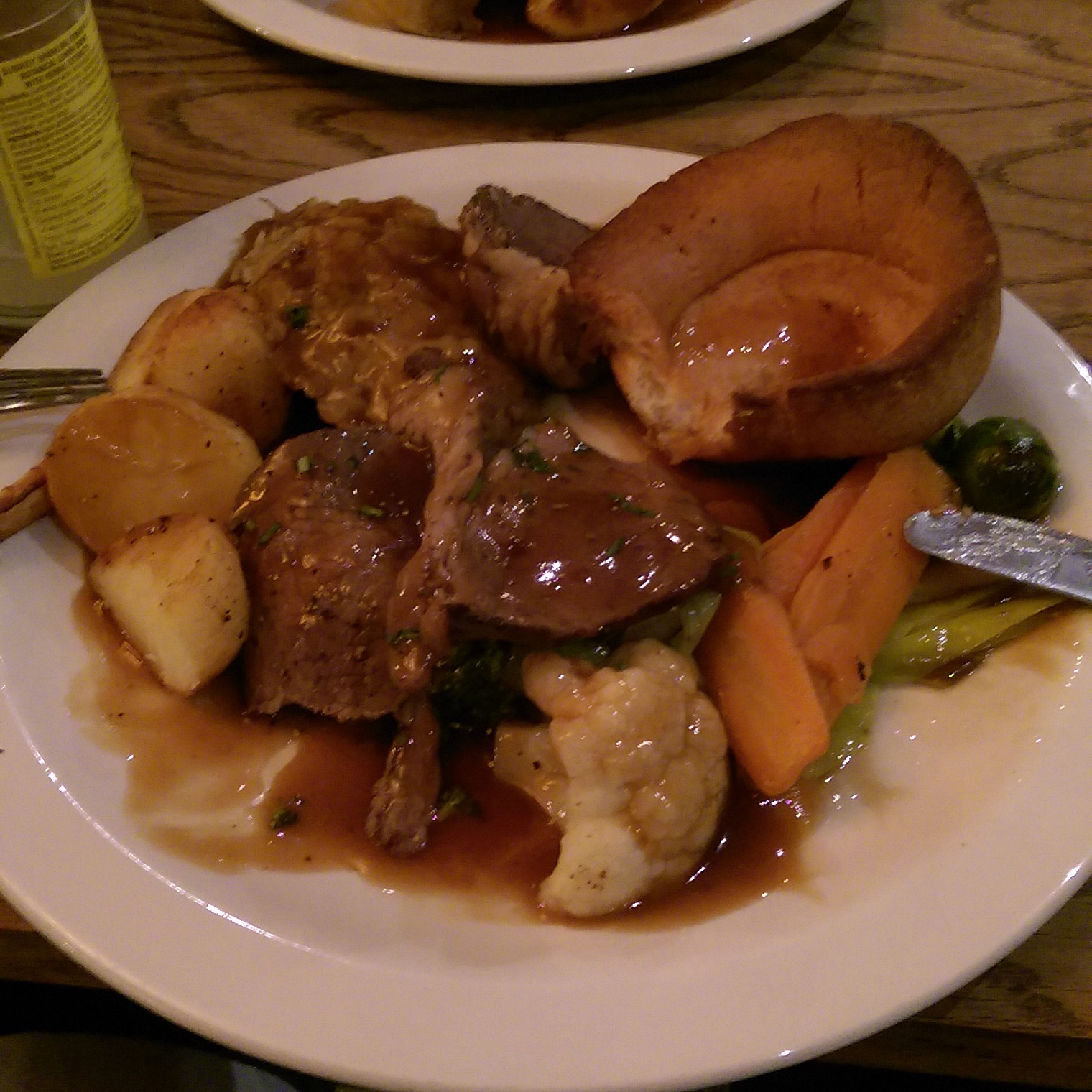 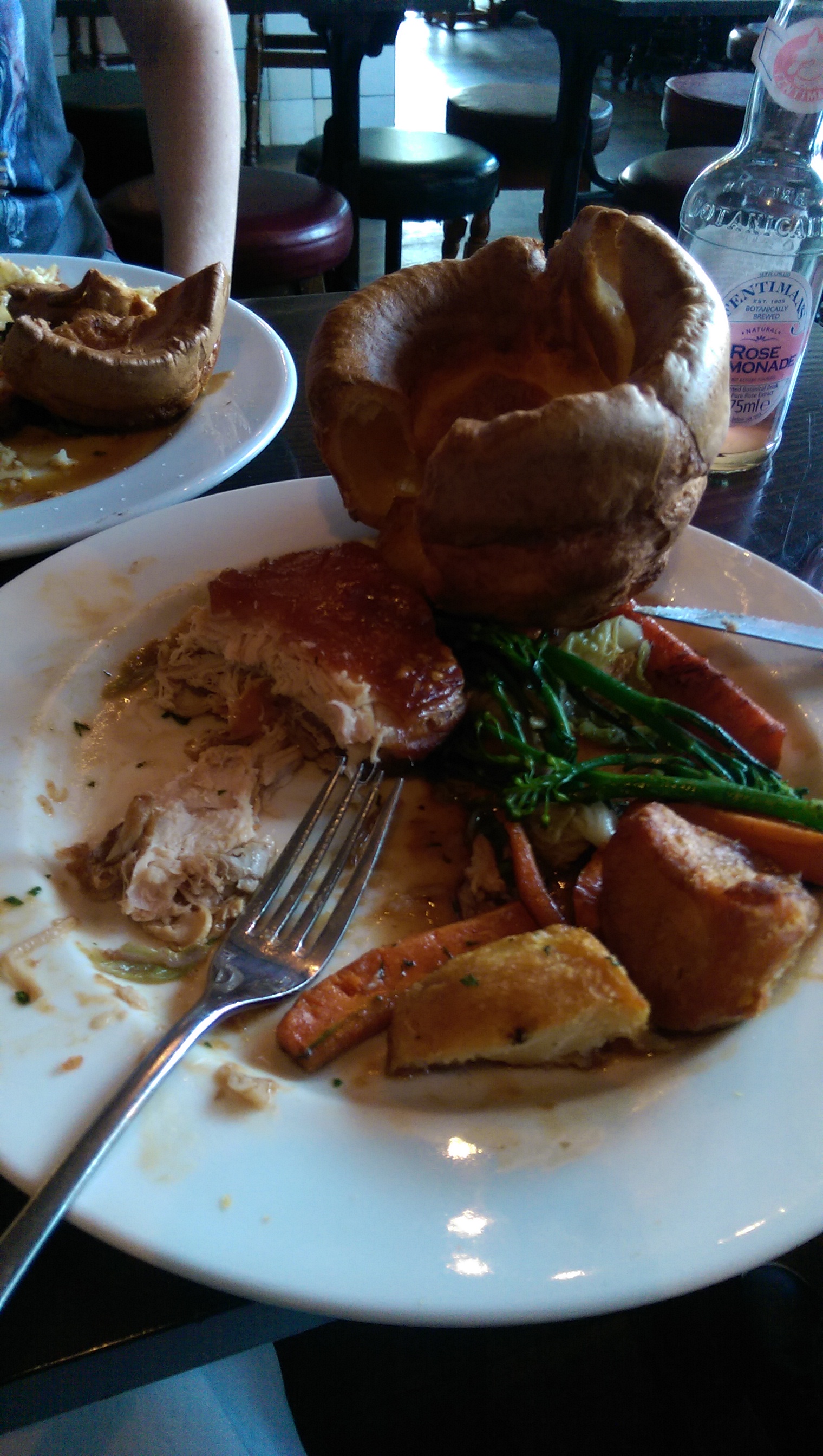 The Swan is Chiswick (okay but not great): 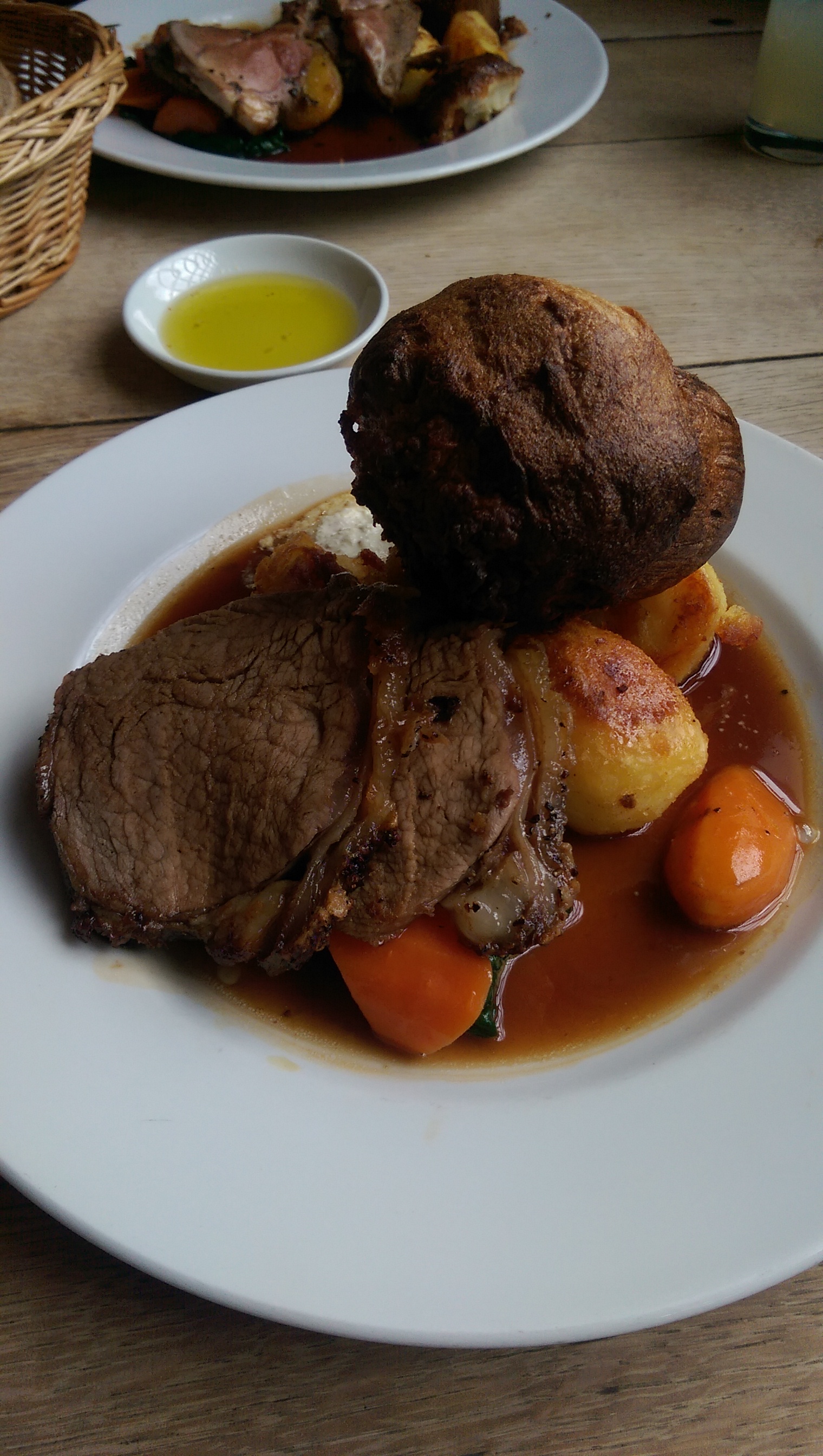 The Roebuck also in Chiswick.  Decent but the meat was overcooked: 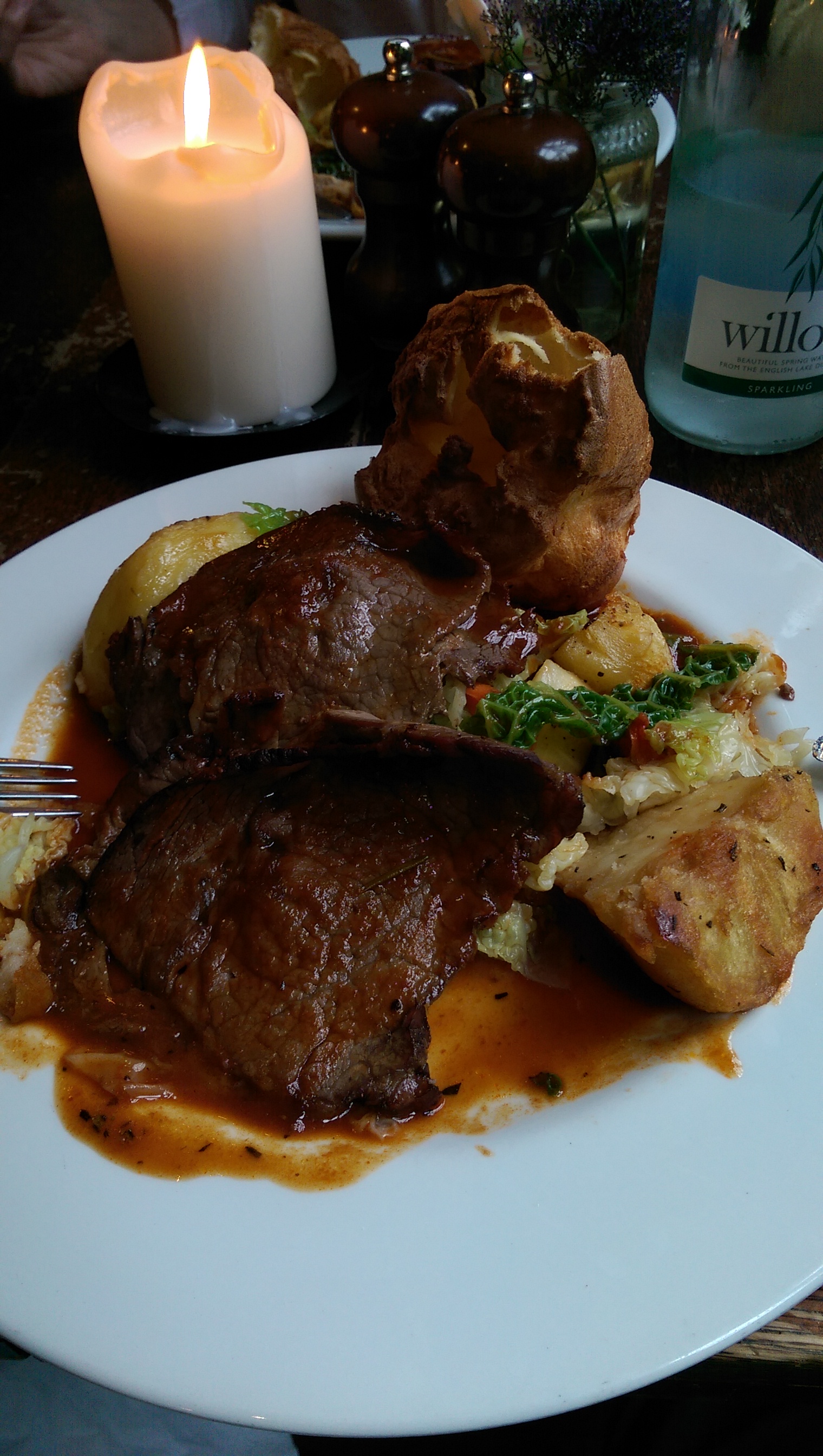