Back to London, travel tips and why to not go to Norway at Easter

Very interesting trip back to London and Norway the past two weeks.  While my trip to London to record with my free improv outfit the London Experimental Ensemble was extremely productive and fruitful (go to my Facebook page for the many pics of that session: https://www.facebook.com/edpettersen1) I actually didn't get a single chance to explore any new restaurants.  It was just too busy and too short a trip.  However that doesn't mean I didn't get exposed to some new food traditions, specifically condiments.  A year spent in London and nobody mentioned Picalilli or Branston's to me?  Blasphemy!  These are two venerable British food institutions and, in the right applications, are indispensable.  Picalilli is a mustard/pickle combo that can be very useful on sandwiches but I found it best in combo with a little Coleman's mustard on my bread (side note: if you're feeling a little "out of sorts", ie: irregular from travel Coleman's will speed it along.  The original strength that is).   Branston's is a type of what Americans might refer to as Chutney however it's not as "glassy" or sweet and better balanced for non-Indian foods IMO.  Just wonderful on sandwiches and perhaps exactly what is used on the classic Ploughman's Lunch.  Highly recommended.

America, we have too much crap.  Our homes are on average much bigger than those in Europe and we over pack.  You don't need to bring your whole life along.  Those big suitcases being marketed the last few years?  Don't do it.  They'll just put you overweight for the airlines anyway.  A second bag?  Don't do it.  Unless you have a gold account you'll pay for each extra bag, up to $100., which really adds up if you're going to more than one location and changing planes and carriers.  Each extra bag for each additional connection can really put you in the poor house up especially if they are overweight.  Keep weight and expenses down.  It can kill an otherwise fun trip.  What do you need to bring?  Three pants, five collared shirts, 3-4 t-shirts, a week's worth of underwear and socks (and really, who's gonna' know if you have to wear socks twice?) and your shower/kit bag.  That's it.  If you're going somewhere warm bring shorts obviously and a bathing suit.  You can hand wash things in the hotel bathroom or home you're staying it.  Nobody is gonna' notice nor care.  That's it.  Do not load down with more stuff.  Leave it home.  Don't bring expensive cameras and electronics unless you make your living with them.  They will just get broken or stolen.  It ain't worth it.  Nobody is gonna' enjoy your boring vacation pictures or videos more if they were taken with a $2000. camera believe me.

And as for gear for my musician friends the same goes.  Cut it down.  Your lightest guitar or other instrument.  Borrow what you can.  A small pedal board (yeah, even for a self-confessed pedal hound like me).  Think about multi-effect units.  You'll be surprised what you don't need or won't end up using.  Bring some strings and pics but don't load yourself down as you will be going from plane to train to car and back.  It will also wear you out.  I get all my gear into my on-board small rolly bag and carry on my guitar.  I check one bag.  That's enough.  I have learned (and have the back surgery scar to prove it).

So in summary, one bag, one small carry-on bag, personal bag (ie: for computer, medicine, tone cozies, etc.) and that's it (plus instrument for the msuicians).

Trust me, yo'll thank me later.

Now Norway.  Oy vey, Norway at Easter.  I have been living and returning to Norway for ten years now and  after writing a book and recording several albums here I thought I had seen every holiday season but I was wrong.  Oh, so wrong.  You really don't want to visit Norway at Easter.  Any other time of the year, including winter but not Easter.  Why?

Because the whole country shuts down for 5 days starting the Wed. before and continuing until the following Tuesday.  Most shops and restaurants close and everyone leaves town for the islands of Sweden (where it's not the same exact holiday) or points warmer like Spain.  Lots of Norwegians in Spain.  You'll find it hard to find good open restaurants (operative word GOOD), supermarkets are also mostly closed and the streets will be deserted until Thursday night which I'll get to in a minute and you want to avoid.  Deserted streets can actually bee nice if you have sights to see and know where to go or like hiking like myself but keep this is mind: you are on your own.

Here's something I wrote to my friends on the Gear Page to explain what was transpiring this past Thursday:

Okay, so let me kinda', sorta' explain what the hell went on here yesterday in my father's crazy country:

So for some reason around 50 years ago somebody in Norway (duh, the church) decided the Thursday before Easter was gonna' be a holiday as well as Good Friday and Easter Sunday (they allowed a reprieve on Saturday so everyone can shop naturally...).  Right, so what does that mean to the average Norwegian?  Go to Sweden where it's not a holiday, drive around in vintage American cars and assorted hot rods old and new, buy as much alcohol as possible and tear both countries apart while pulling all kinds of insane stunts and mooning the TV journalists on live TV who cover this (Nothing like encouraging the savages huh?  Ratings!  Remind you of something?  Anyways...).  One such stunt included four idiots on the motorway at high speed, two of whom decided to trade seats in the back...over the roof!  The situation is so bad that it's the only time all year the police in Sweden and Norway actually trade places and the Swedes come here to keep law and order while the Norske police go to Sweden to try to control things.  Swedish police carry guns unlike their Norwegian cousins so they have to relinquish them at the border.  When the Norwegians get tired of sacking Sweden they come back here and camp in parking lots around town and go berserk until daylight.  Every place this morning looks like a tornado hit it in a usually pristine, normally very clean and orderly town.

Everything is closed down again today save for one mini mart called Joker (like 7 Eleven) on the outskirts of town.

Religious folk aren't happy they're even open and probably think they're Satanists but their logo (playing card Joker) might have something to do with that as well.  Me?  I'm completely okay with them being open.  They had coffee.

The crack about coffee is funnier when you know that yours truly was stupid enough to open a bag off sealed coffee in my flat cupboard without checking the expiration date (Ouch! 2014!!).  Coffee is only good 3-4 months after expiration date BTW.  Lesson learned.  I got sick.  But not to digress...I barely got to see any of my friends this week and just played with my gear, re-programmed some stuff which was actually helpful, watched some online tutorials and lessons (Yup, I do that.  One can always get better) and watched a European Magpie build a nest outside my window.  Wish I had filmed that.  Could've made a neat music video.  Or not.  Oh, and got this installment of the blog written so there's that.

So, no Norway in Easter.  Check.  Condiments in England.  Double check.  Pack light.  Very light.  Roger wilco!  So, we good?  Yup, we'uns very good.  I hope those tips help and I hope y'all get to London or Norway or any points in Europe soon.  They have a lot to teach us.  We can use that right now.  Cheers!!!!!!

(Oh, but I did get to take some pics of food and stuff of course.  Here they are with some explanations):

Branston's and Piccalilli from London: 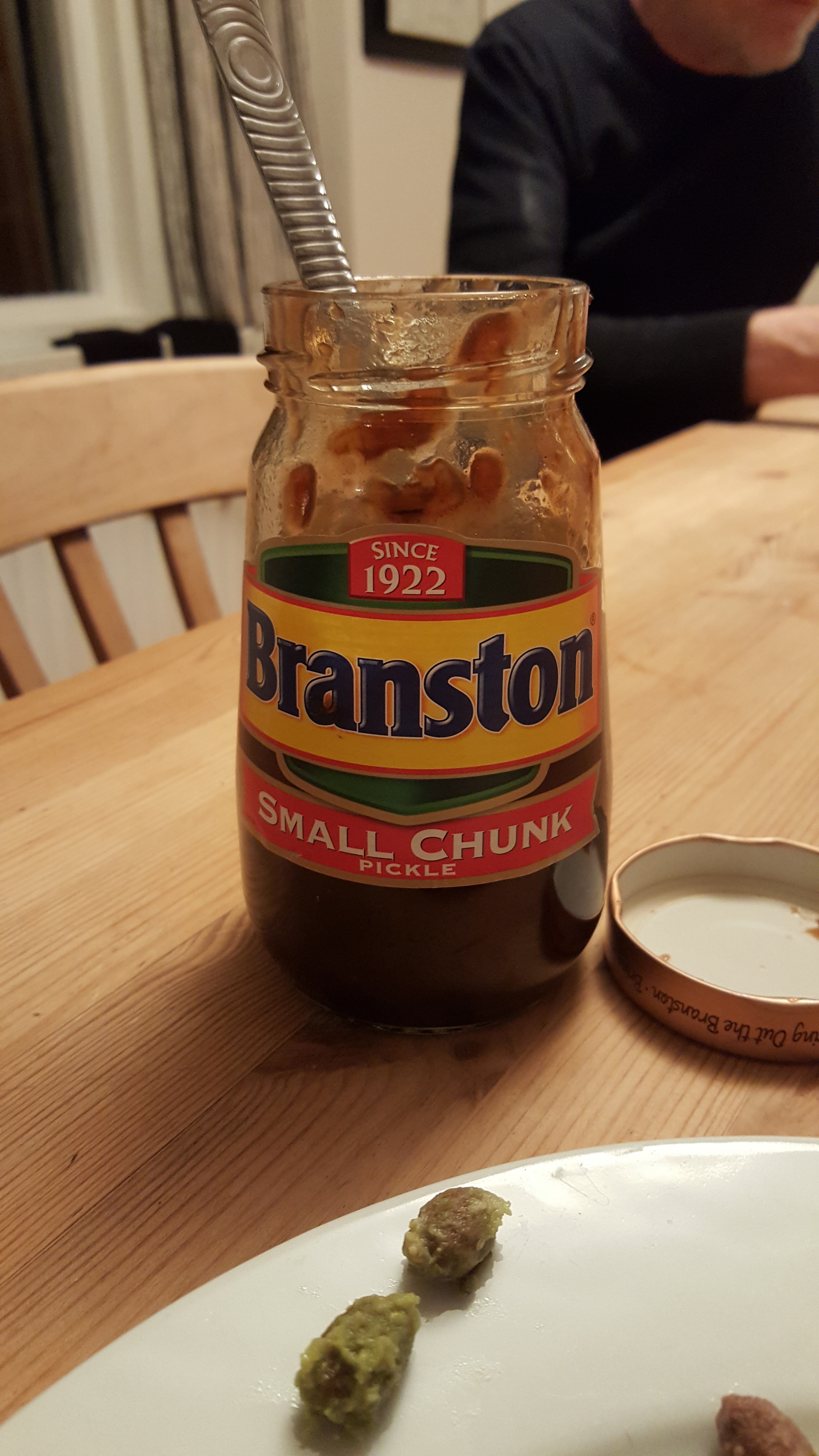 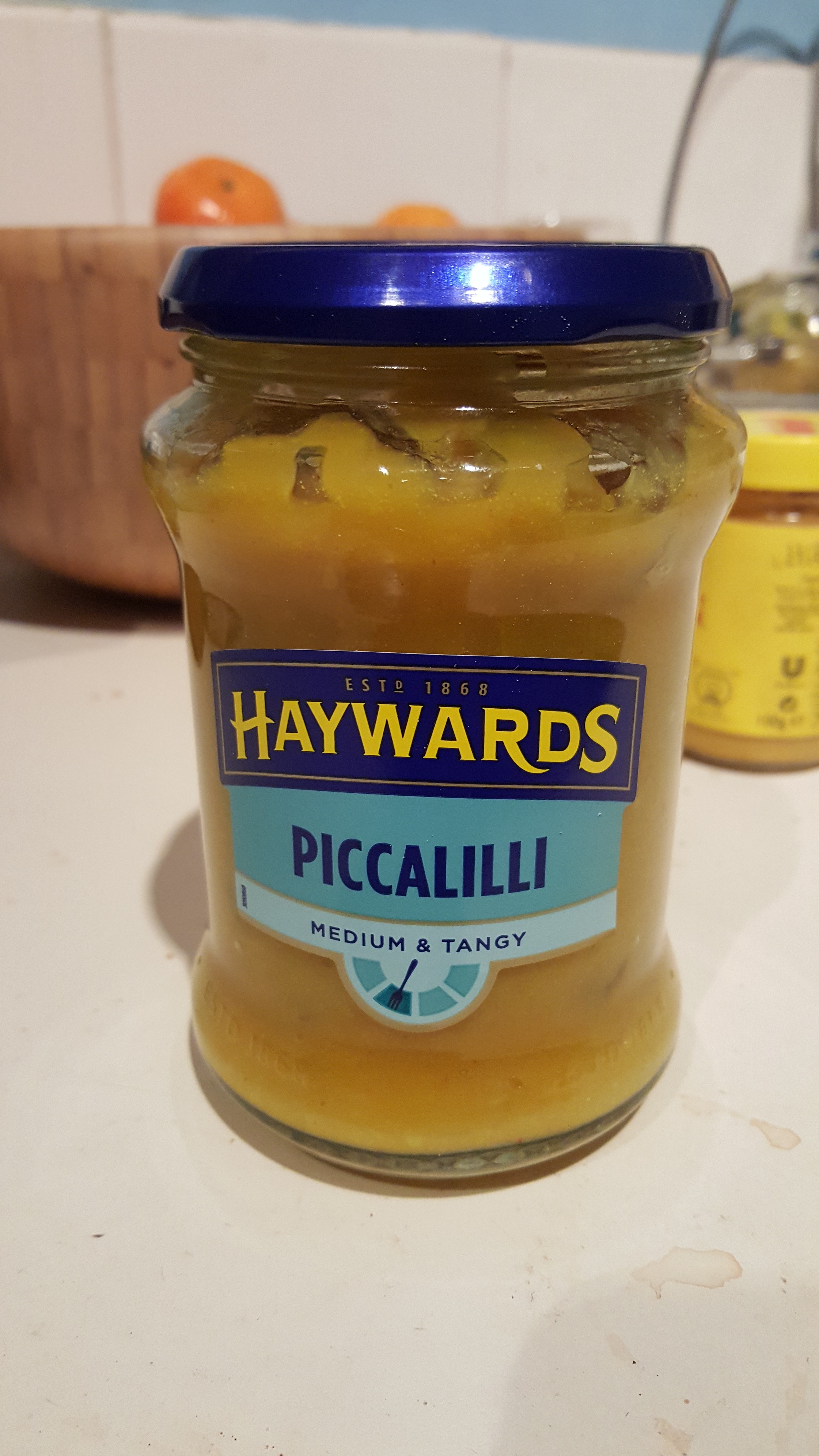 Okay, so I bought a guitar and a guitar pedal before leaving London from my dear friends at No.Tom (the guitar stayed behind until I come back): 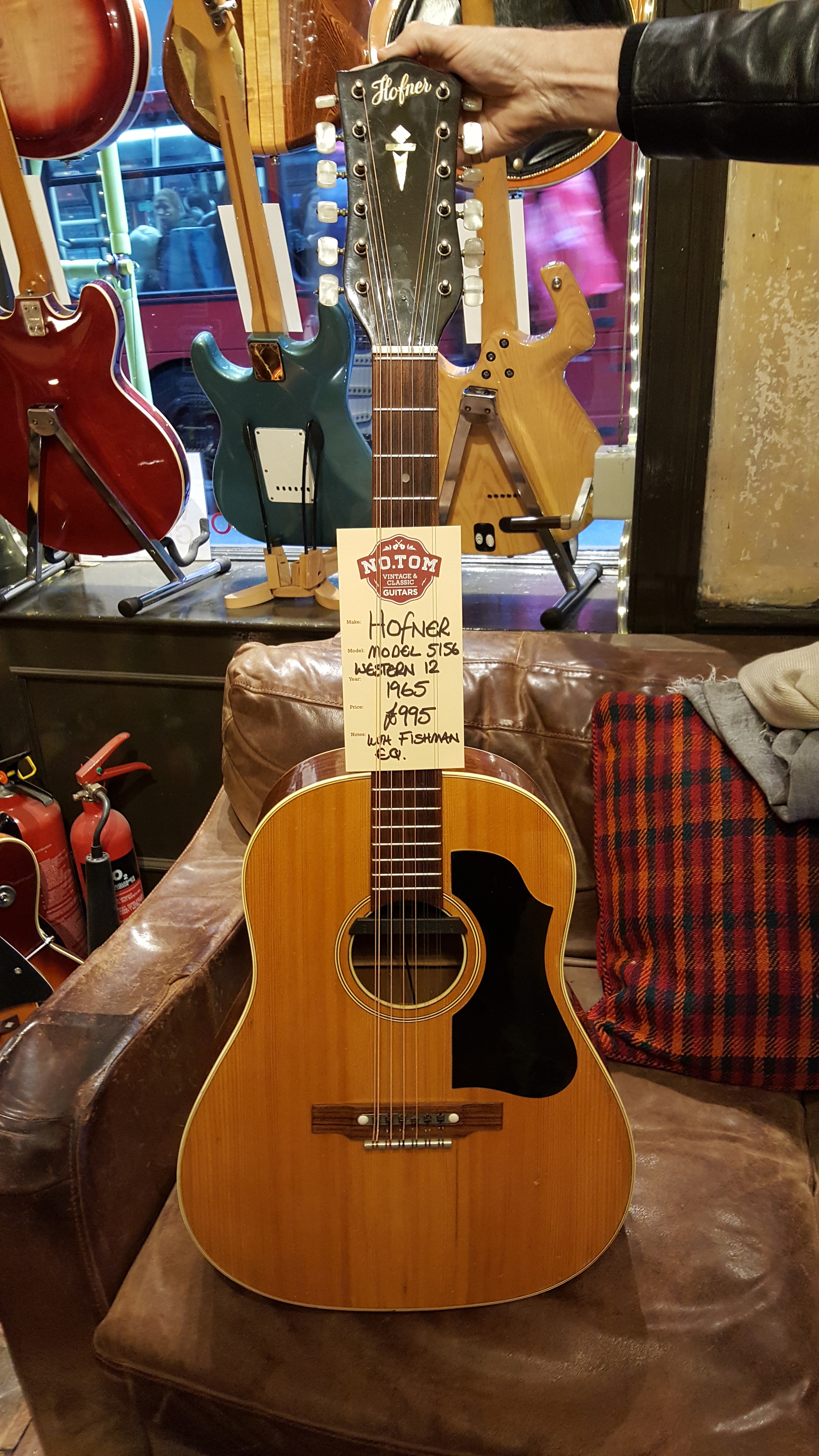 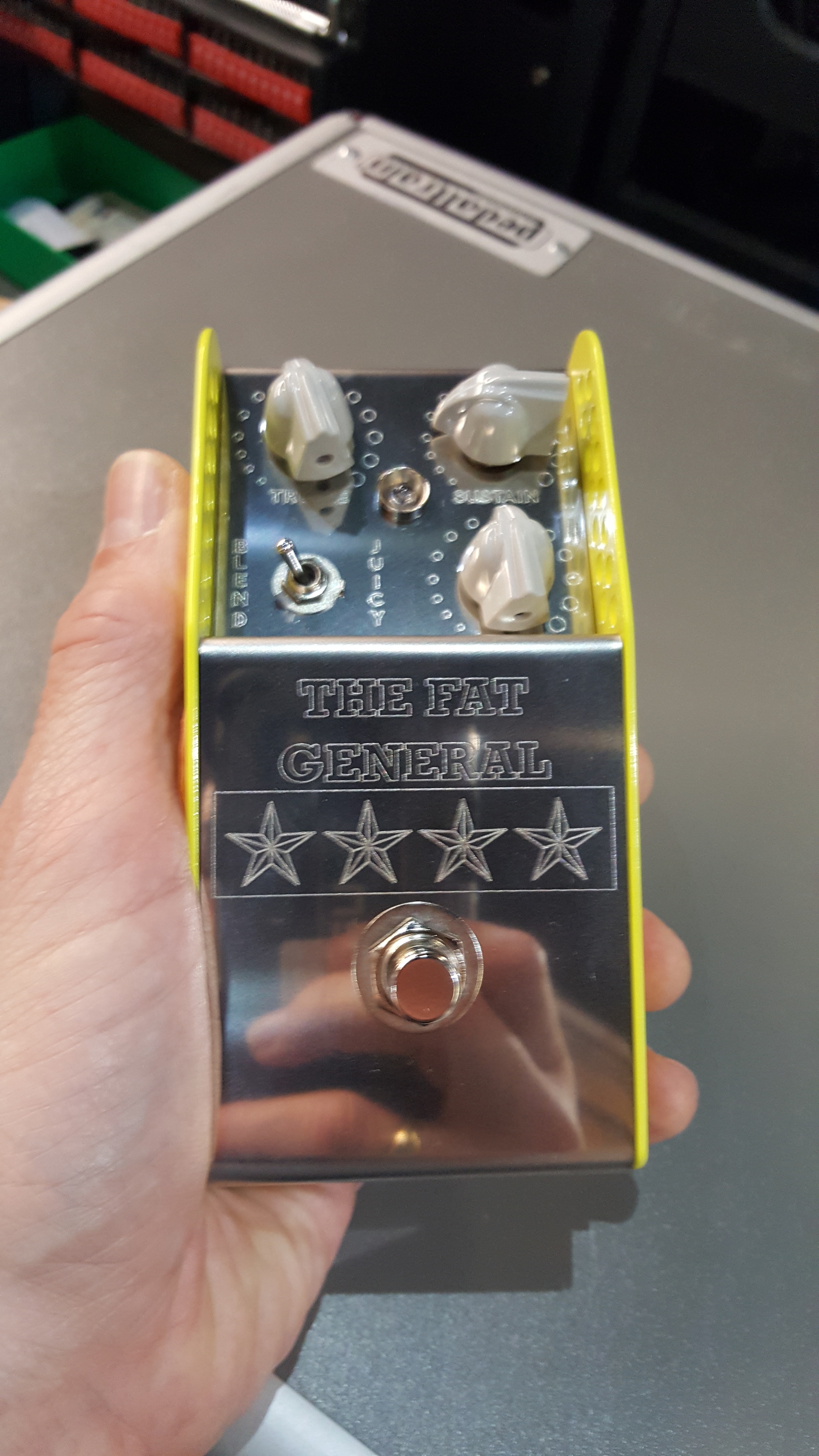 Ran into guitar wizard Tommy Emmanuel at the airport.  We both live in Nashville and have never met: 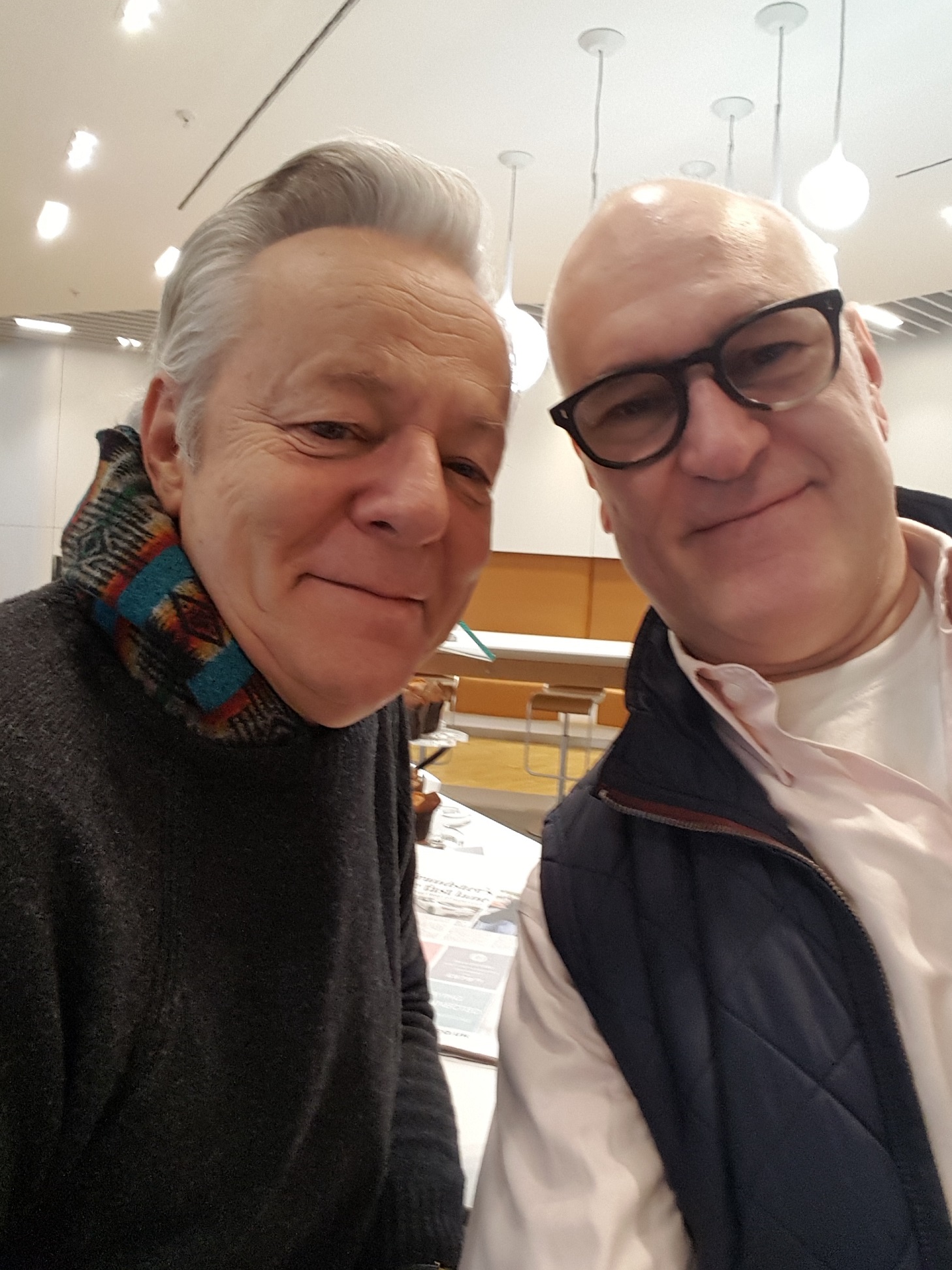 Ran into my buddy Thurston Moore at the John Tilbury/Keith Rowe (AMM Muusic) gig at Cafe Oto (and had a nice chat with Norwegian percussion legend Ingar Zach): 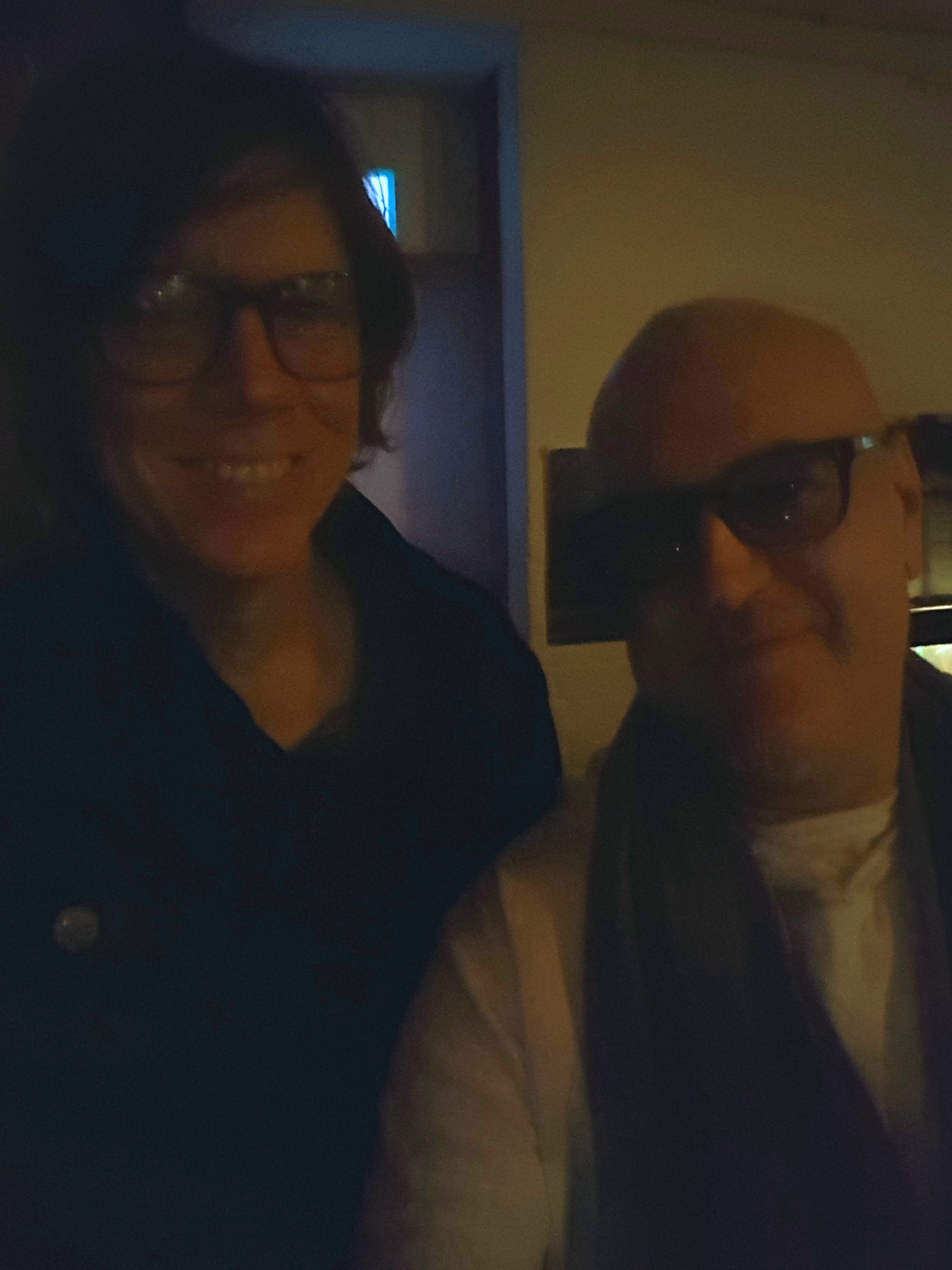 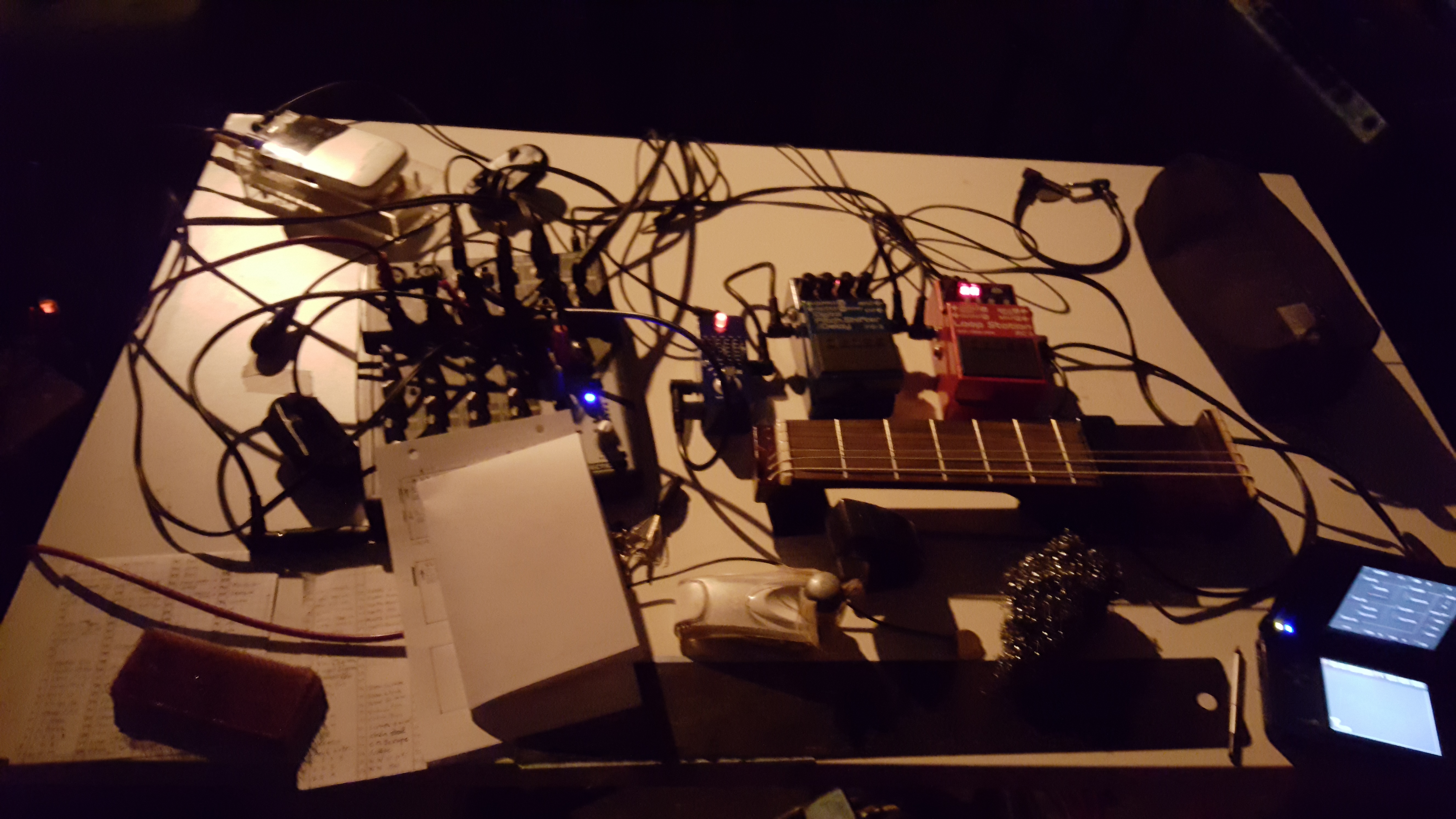 My first meal back in Halden, Norway at my favorite restaurant, Cafe Ernesto.  Sadly Ernesto is retiring and moving to Spain.  Sad ravioli: 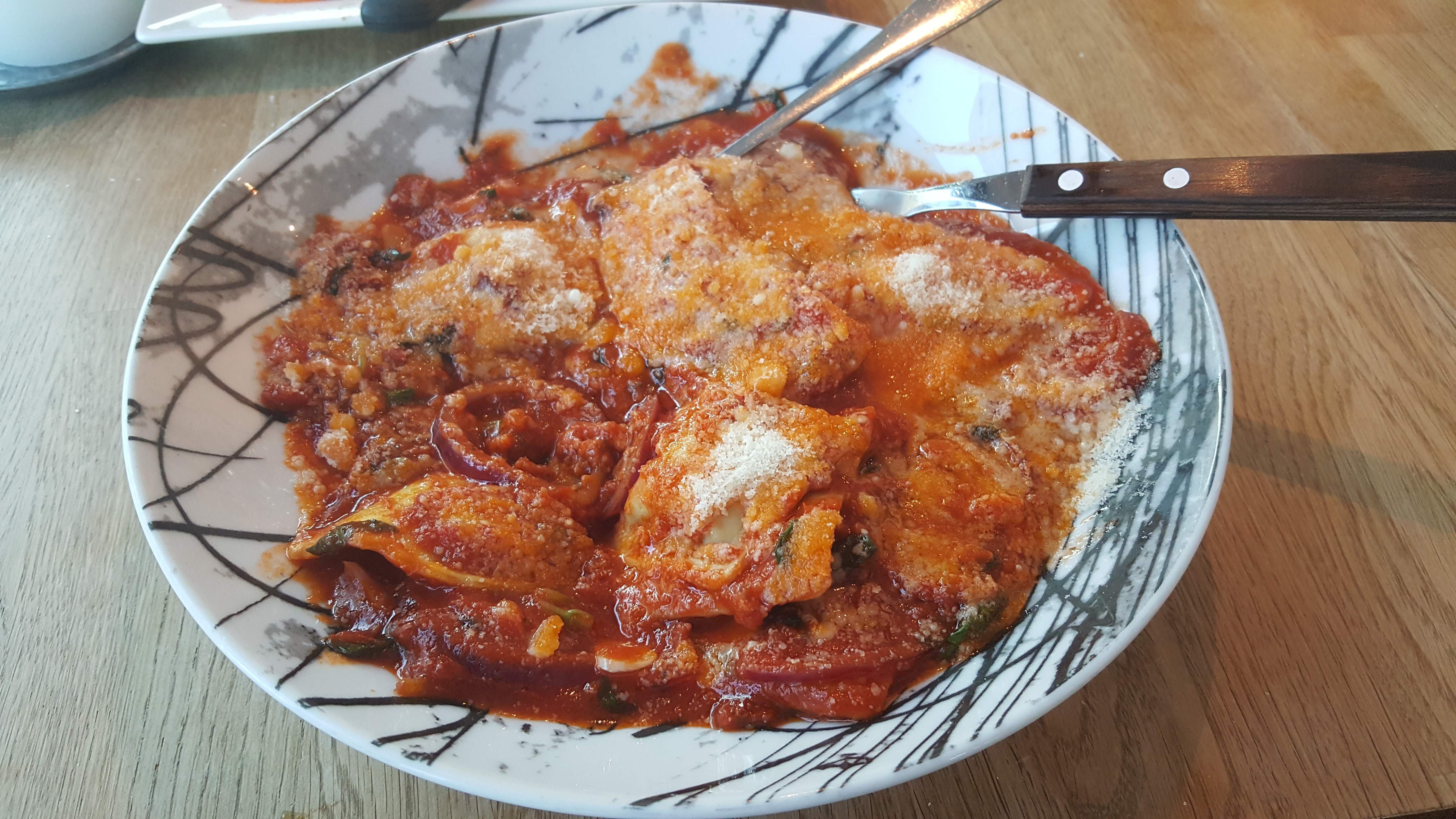 The deserted streets of Halden the Thursday before Easter: 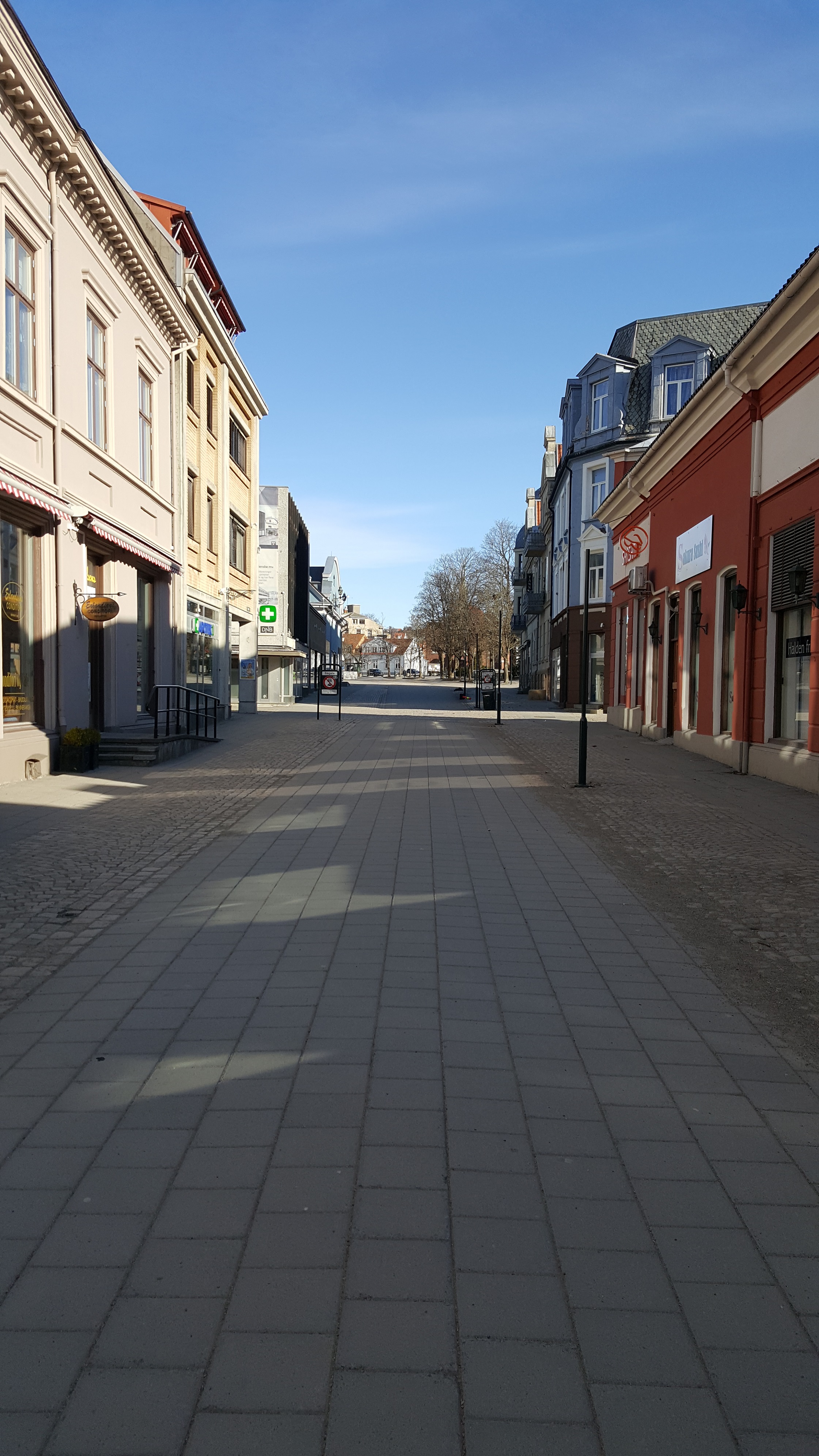 The canal looks fine though: 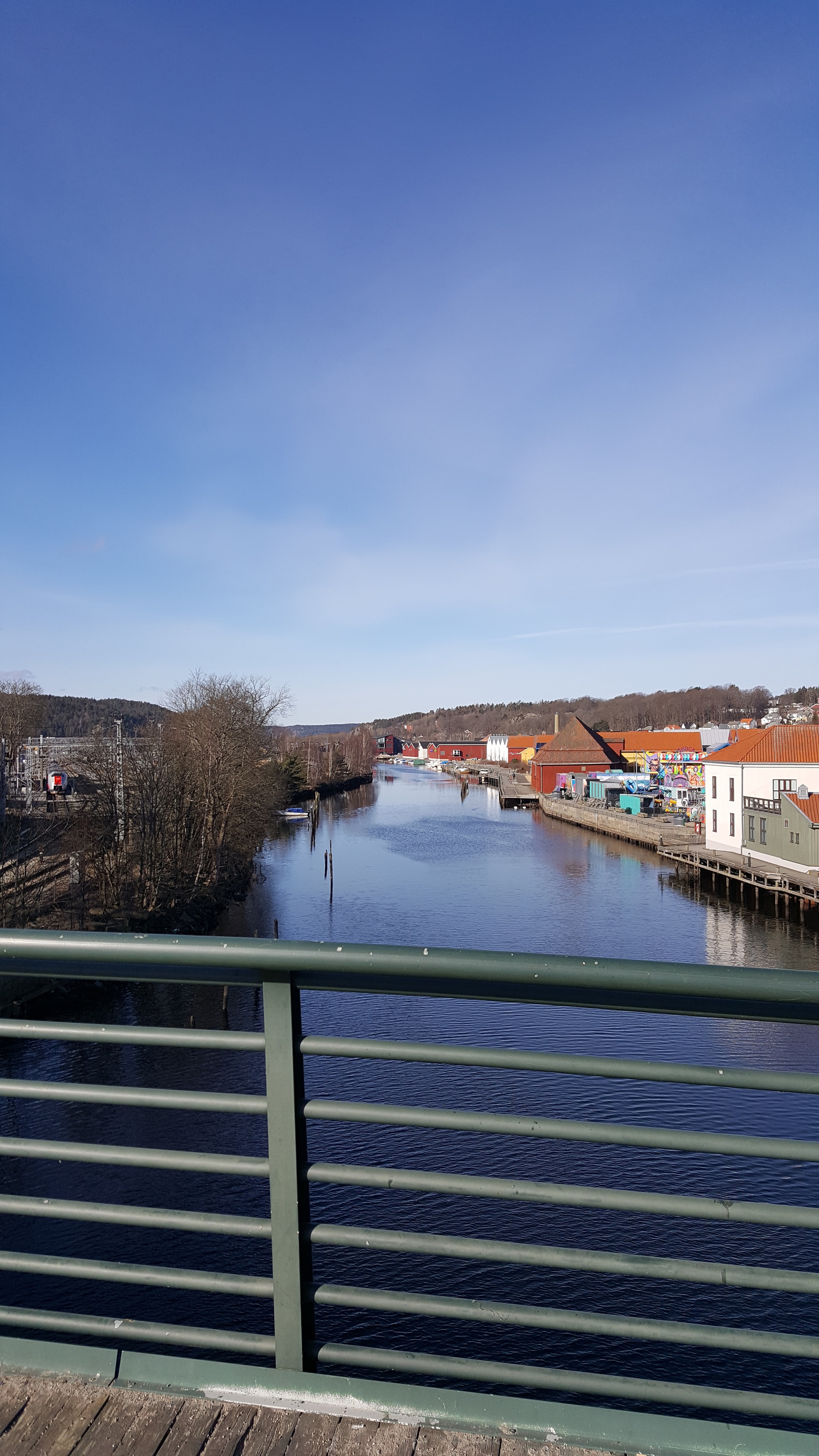 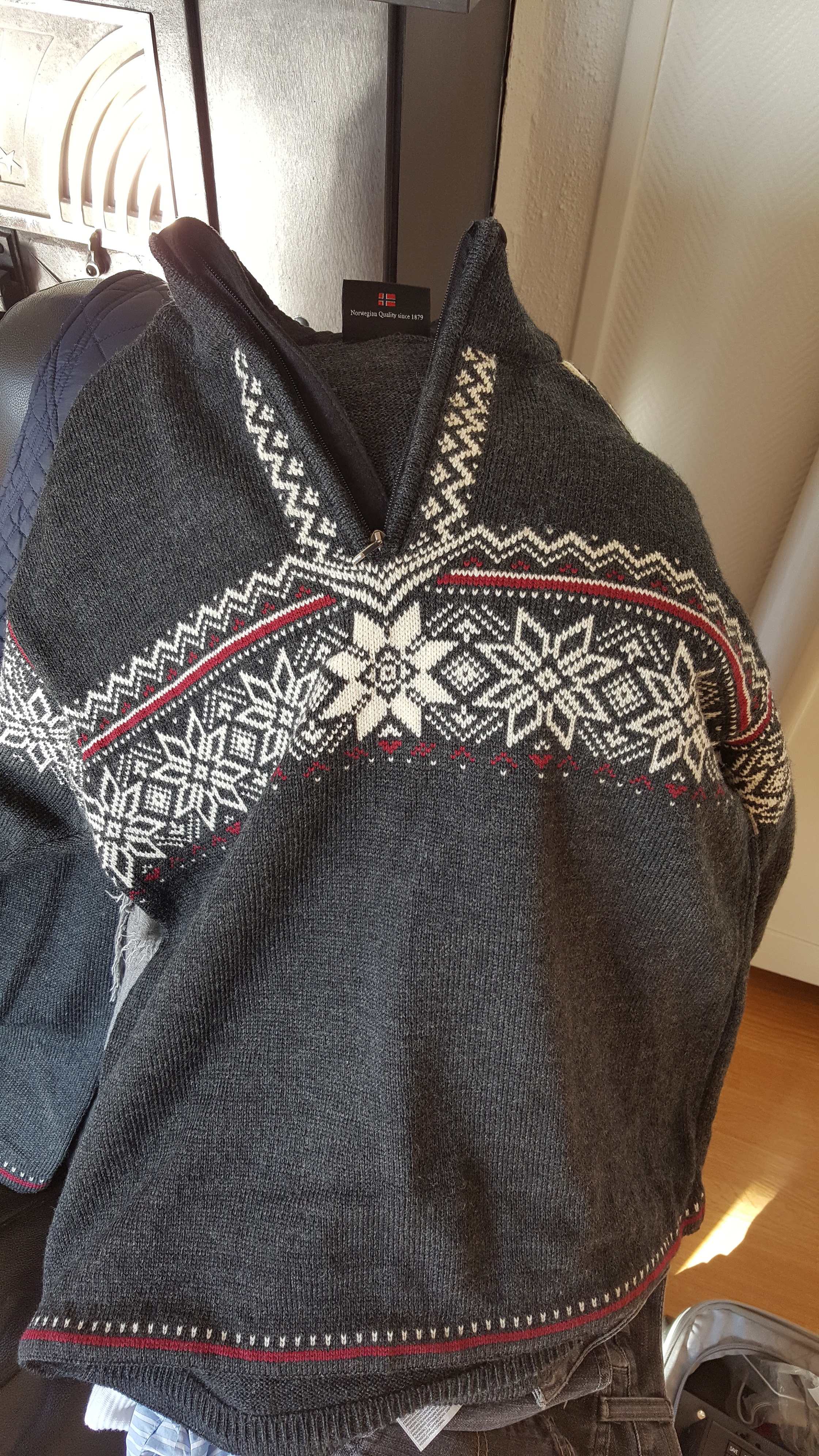 The magic elixir, Solo orange soda.  Once you taste it there's no going back (and no Fanta): 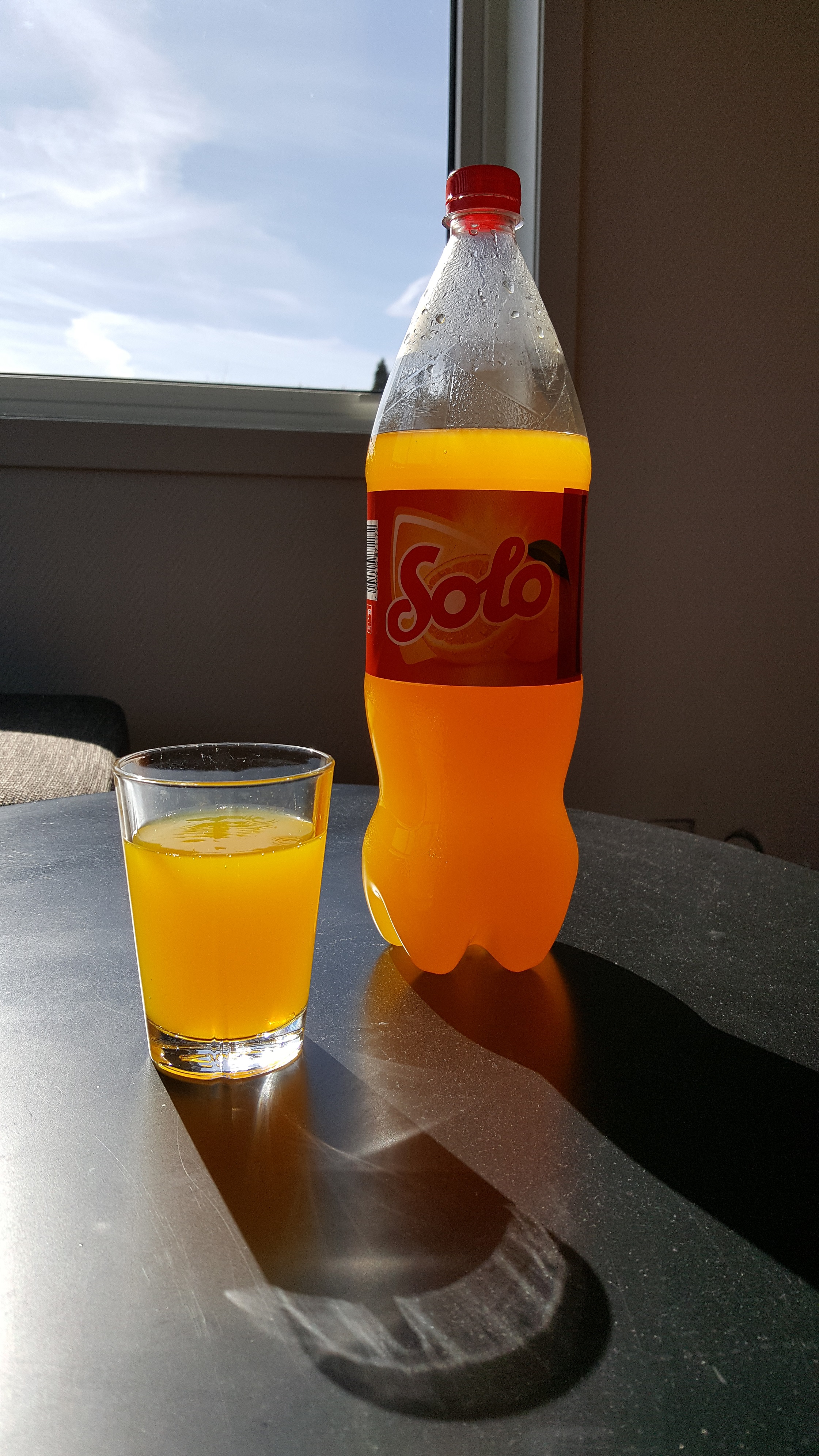 I did learn something about food on this trip.  Norwegians LOVE waffles, their own kind thinner and slightly sweeter than ours but tastier and more textured.  Try them with Norwegian brown cheese.  I thought, "No way" but it's glorious as well with jam and cream: 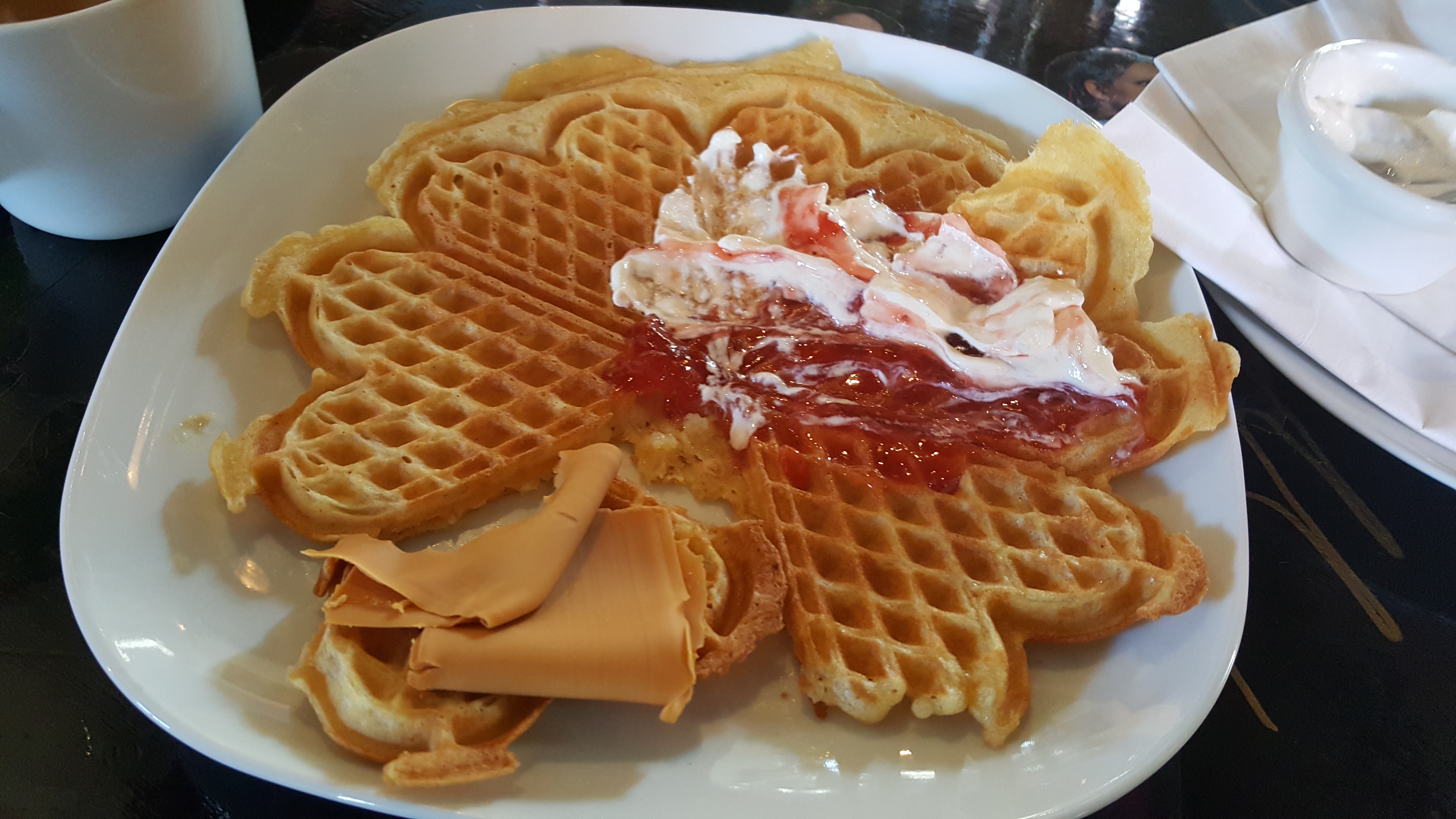 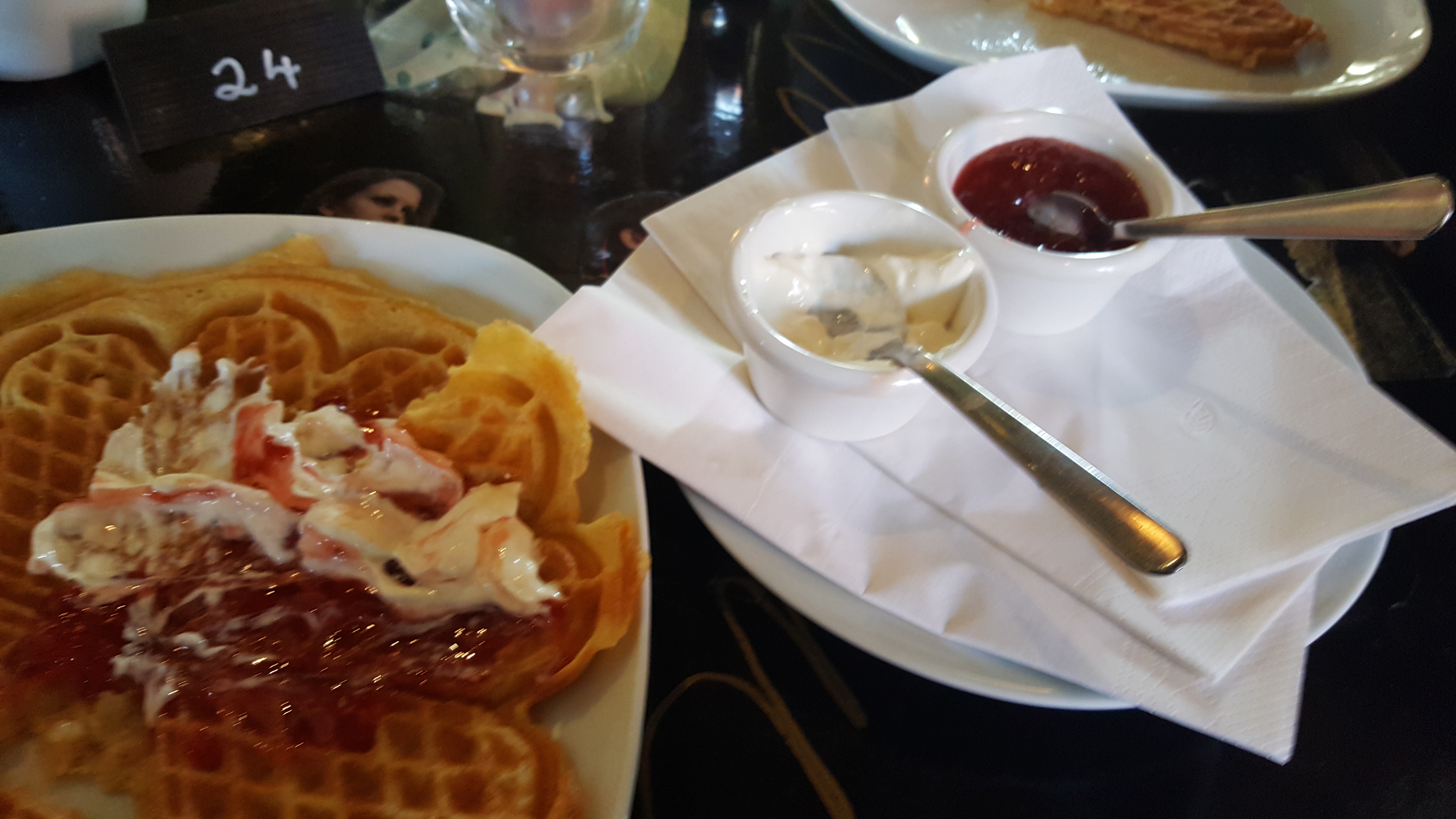 Fredrikstad, the old fortress and the cafe where we had these magical waffles and of course coffee.  Serious coffee (Norwegians don't mess around when it comes to both) 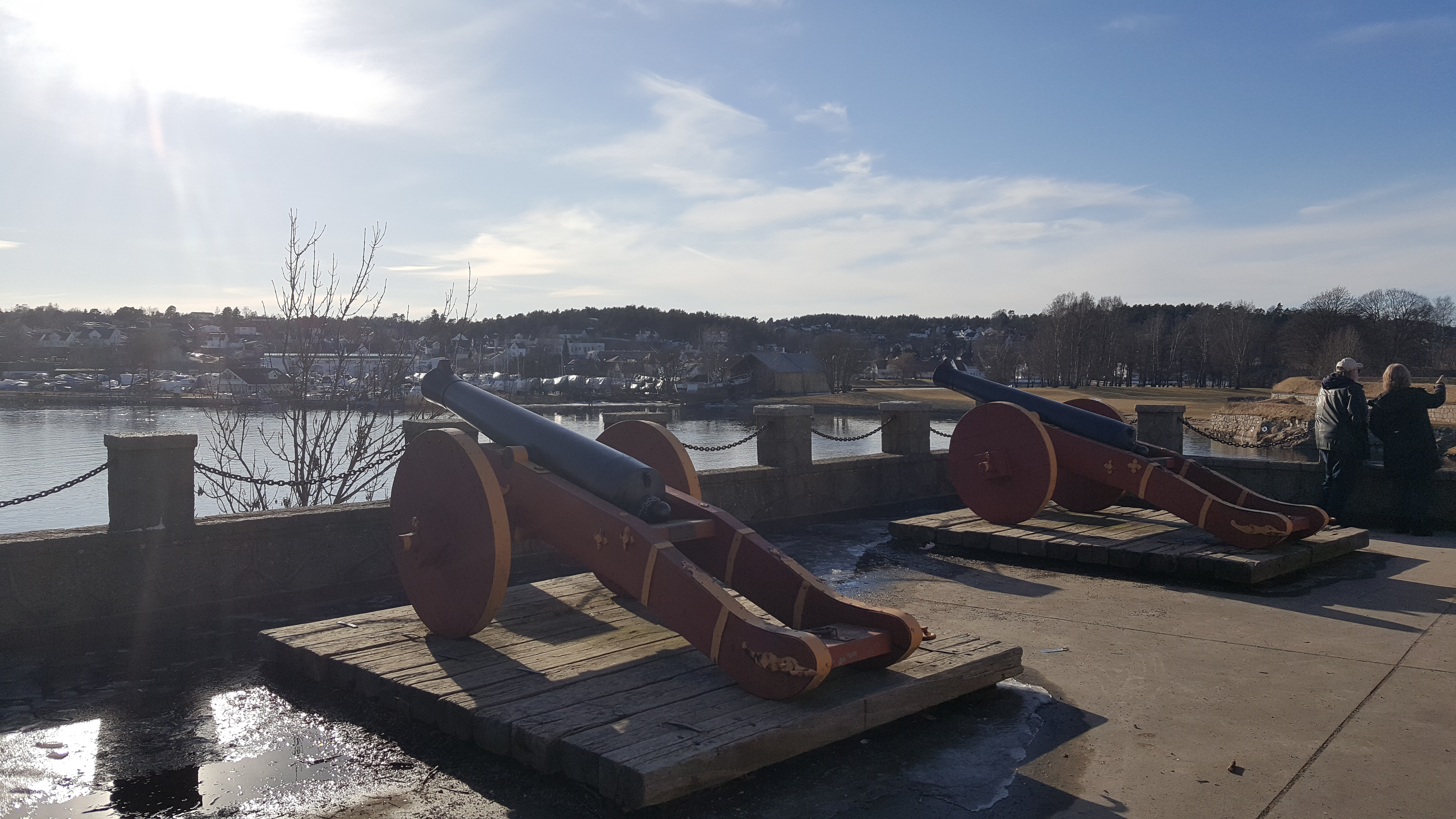 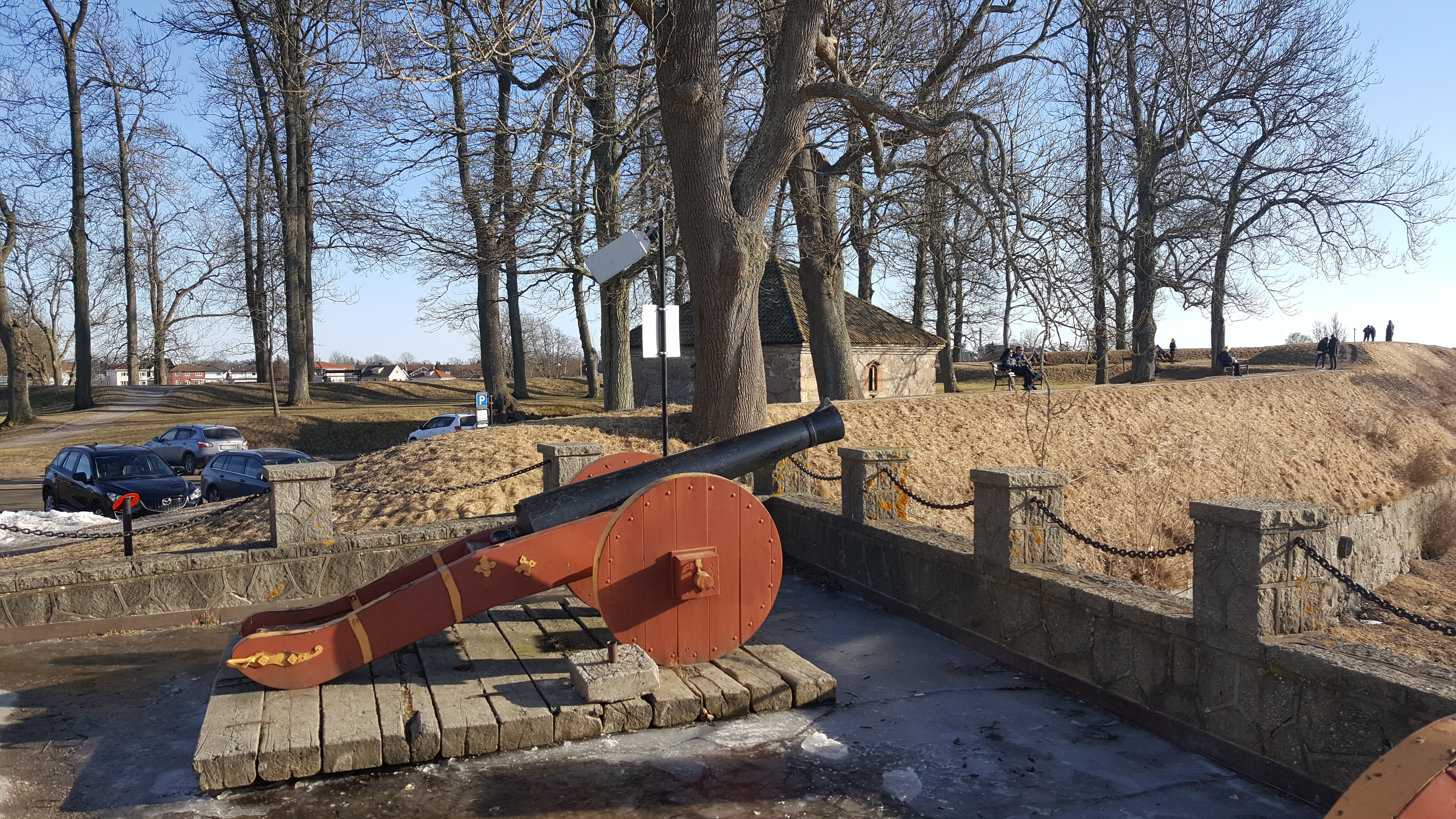 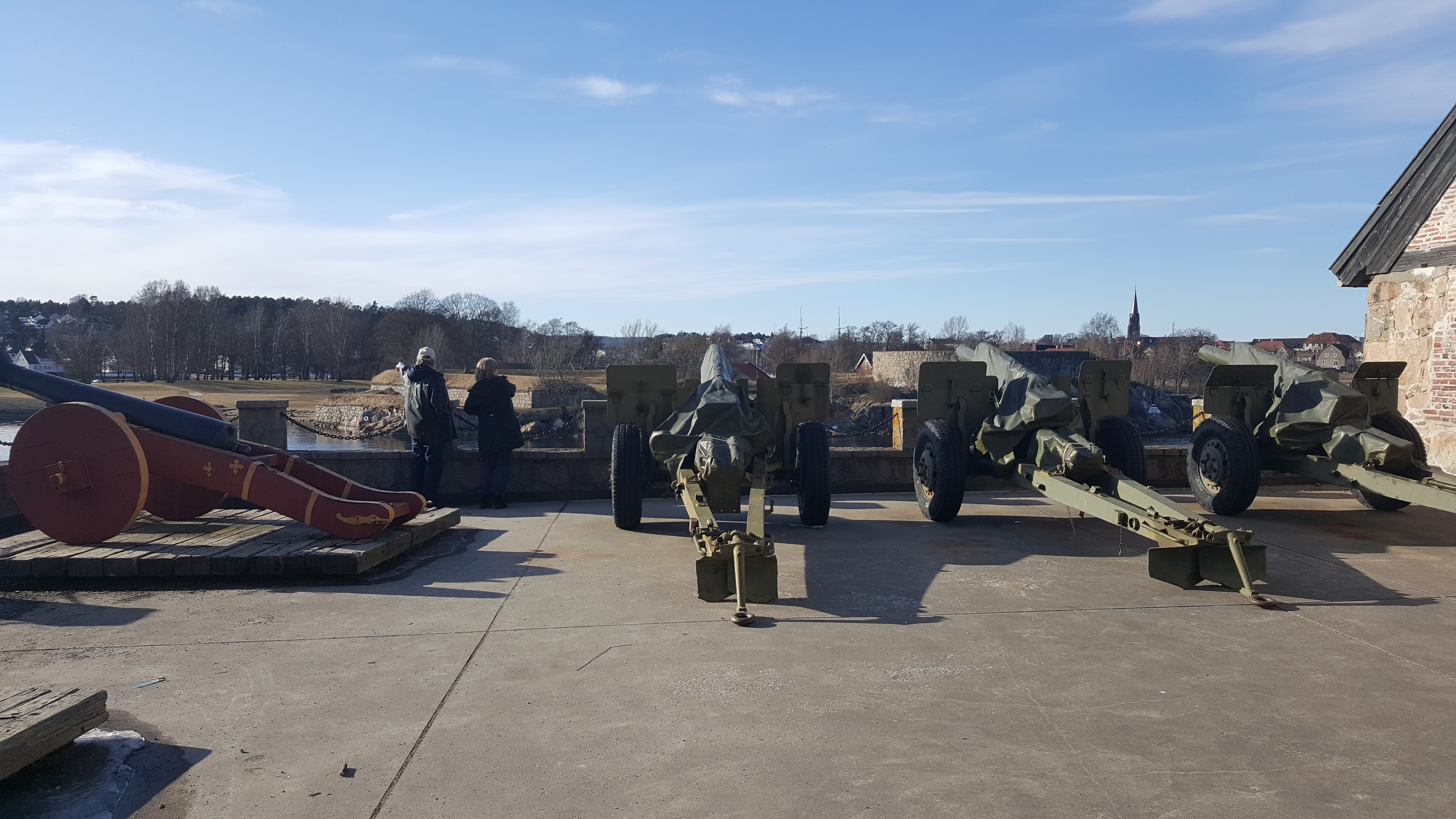 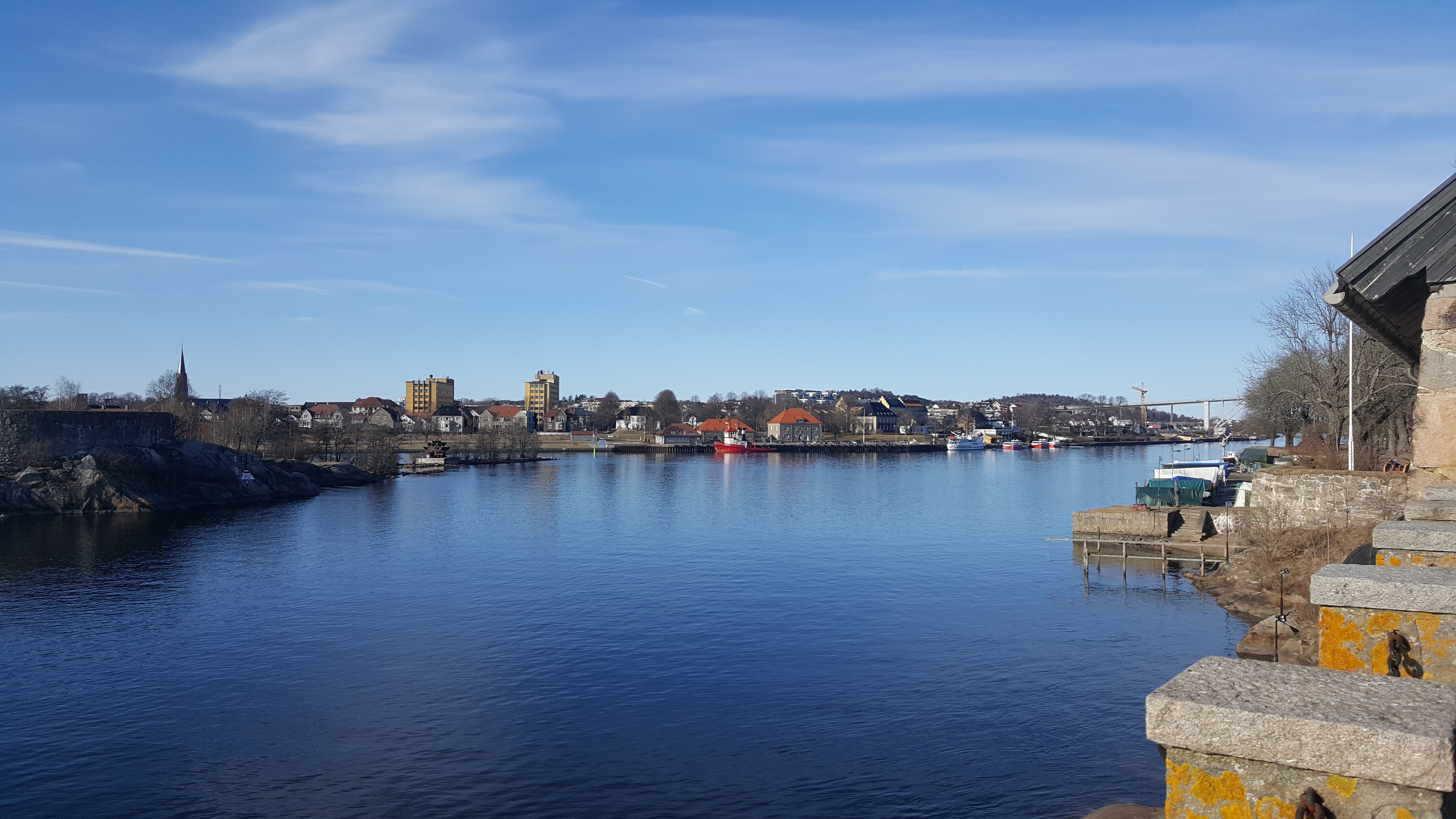 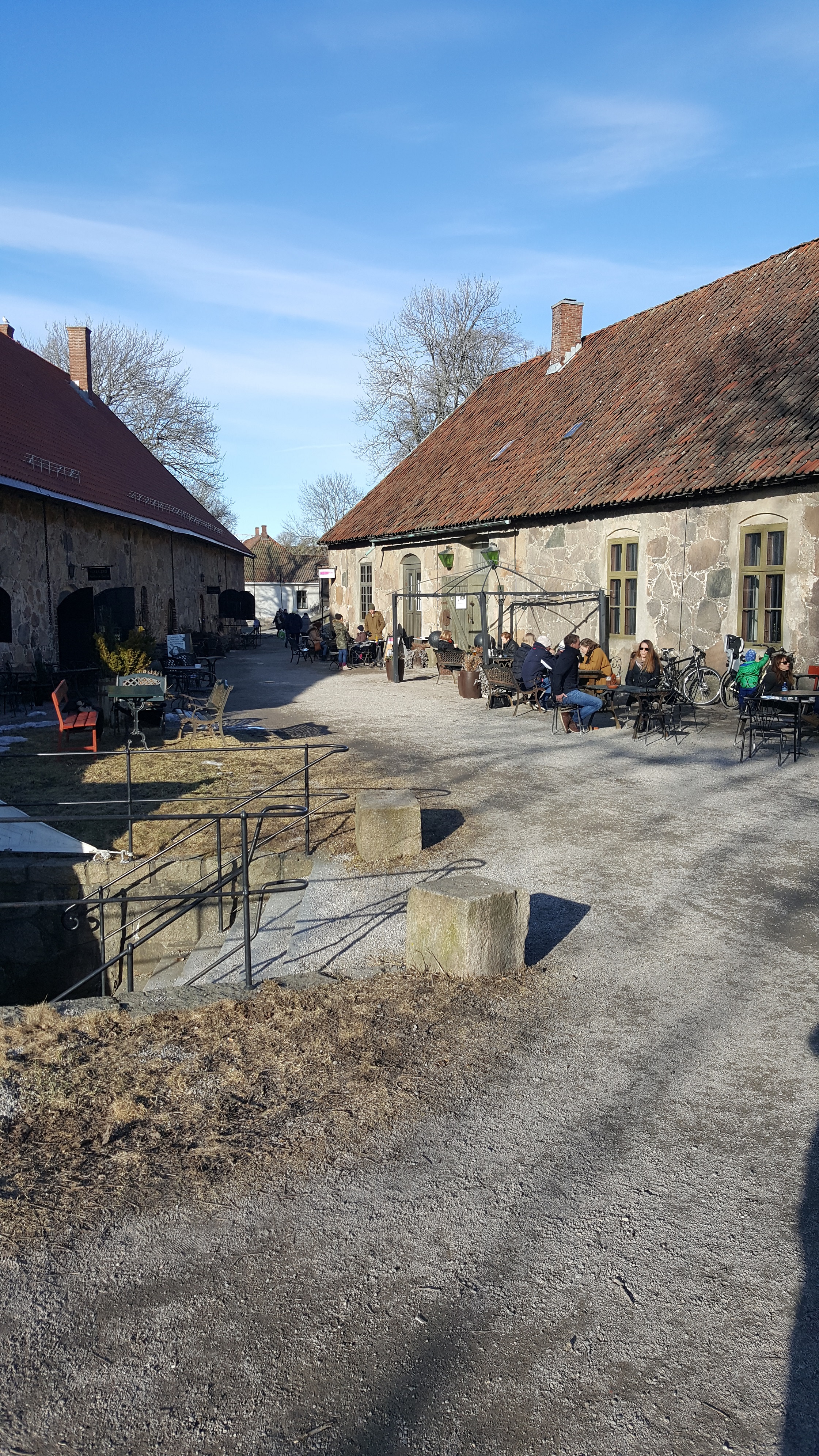 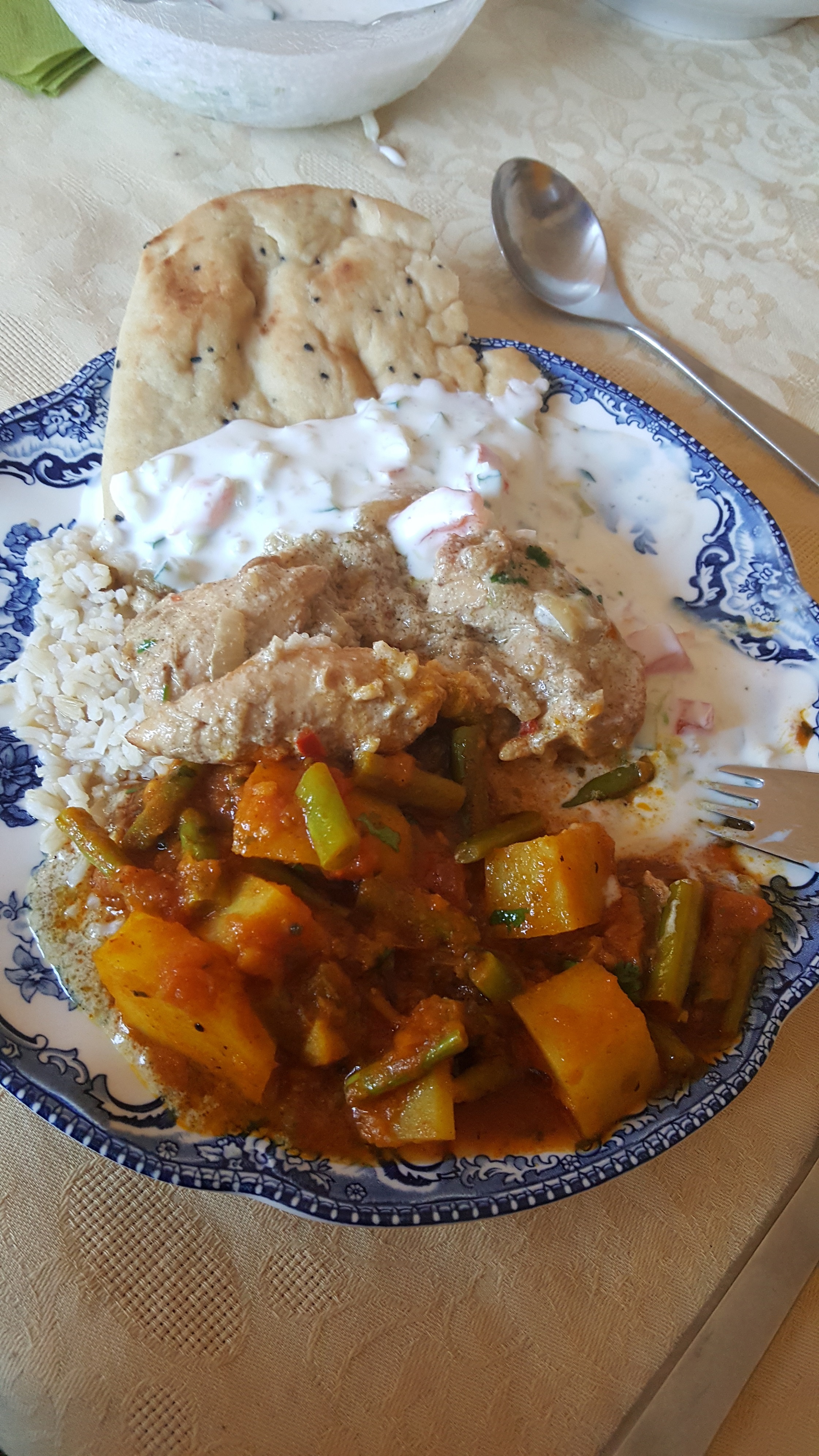 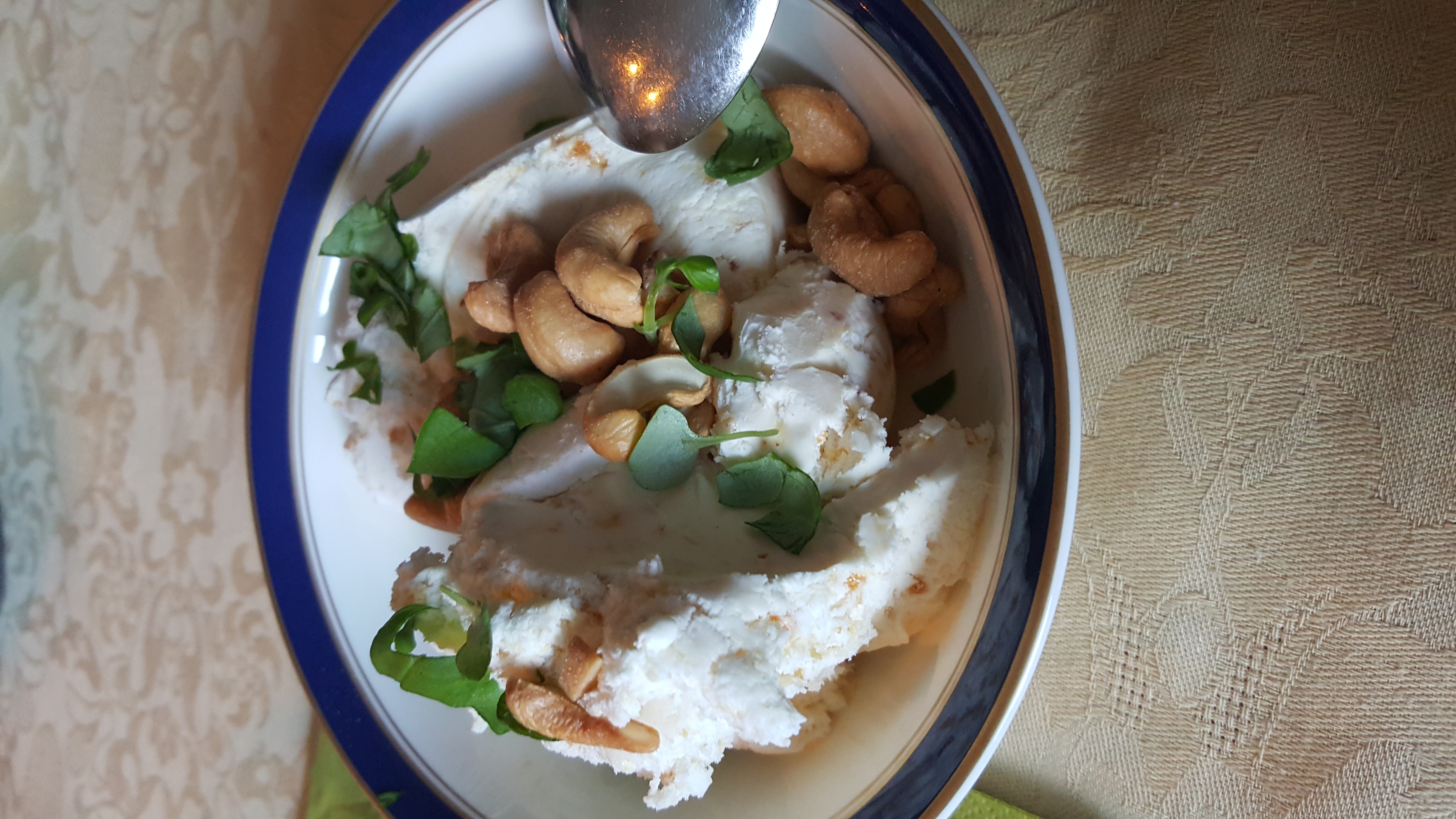 The magpie's nest on the side of the tallest tree on the right.  He's peaking out on the left.  He was very cagey: 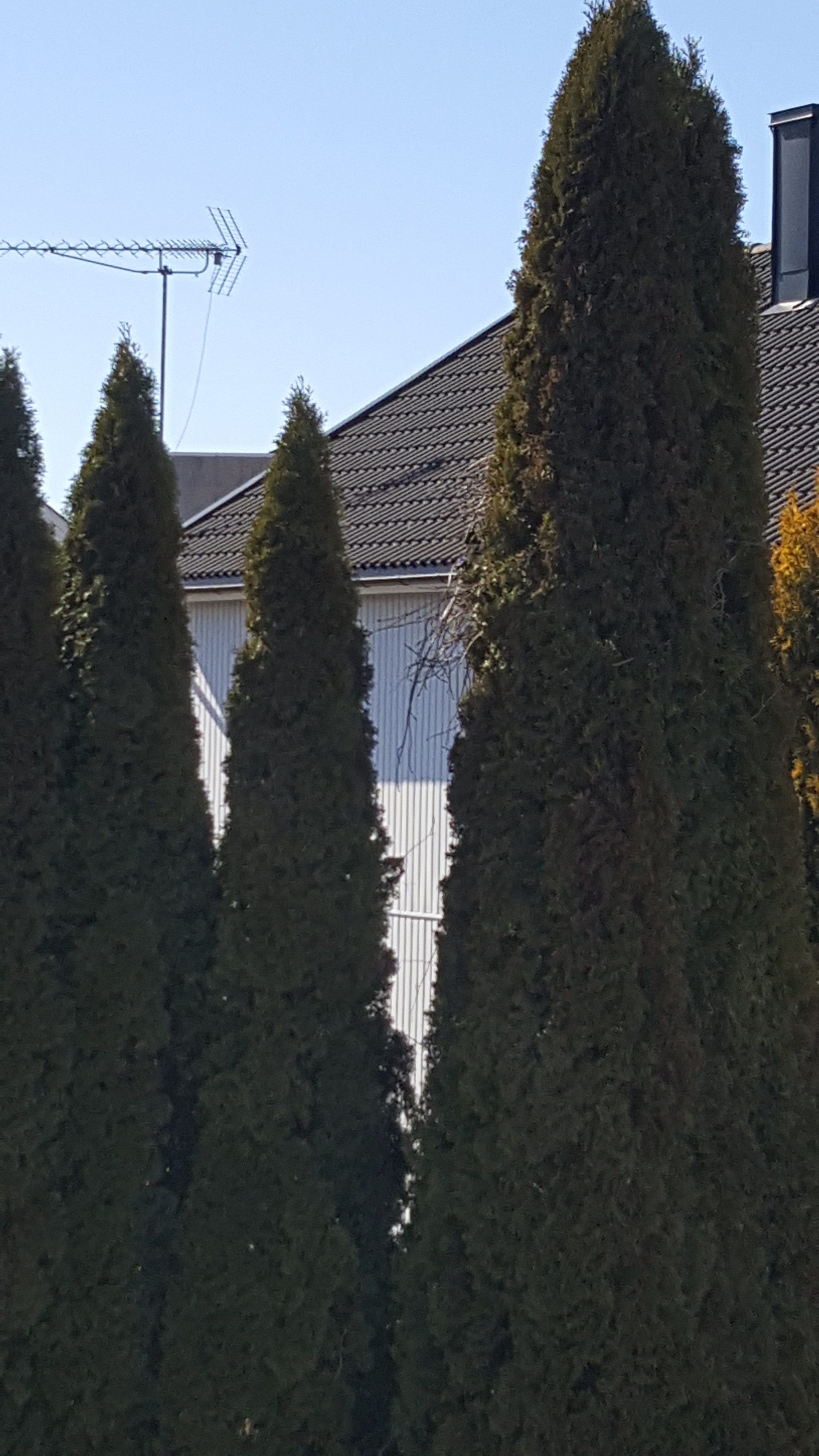 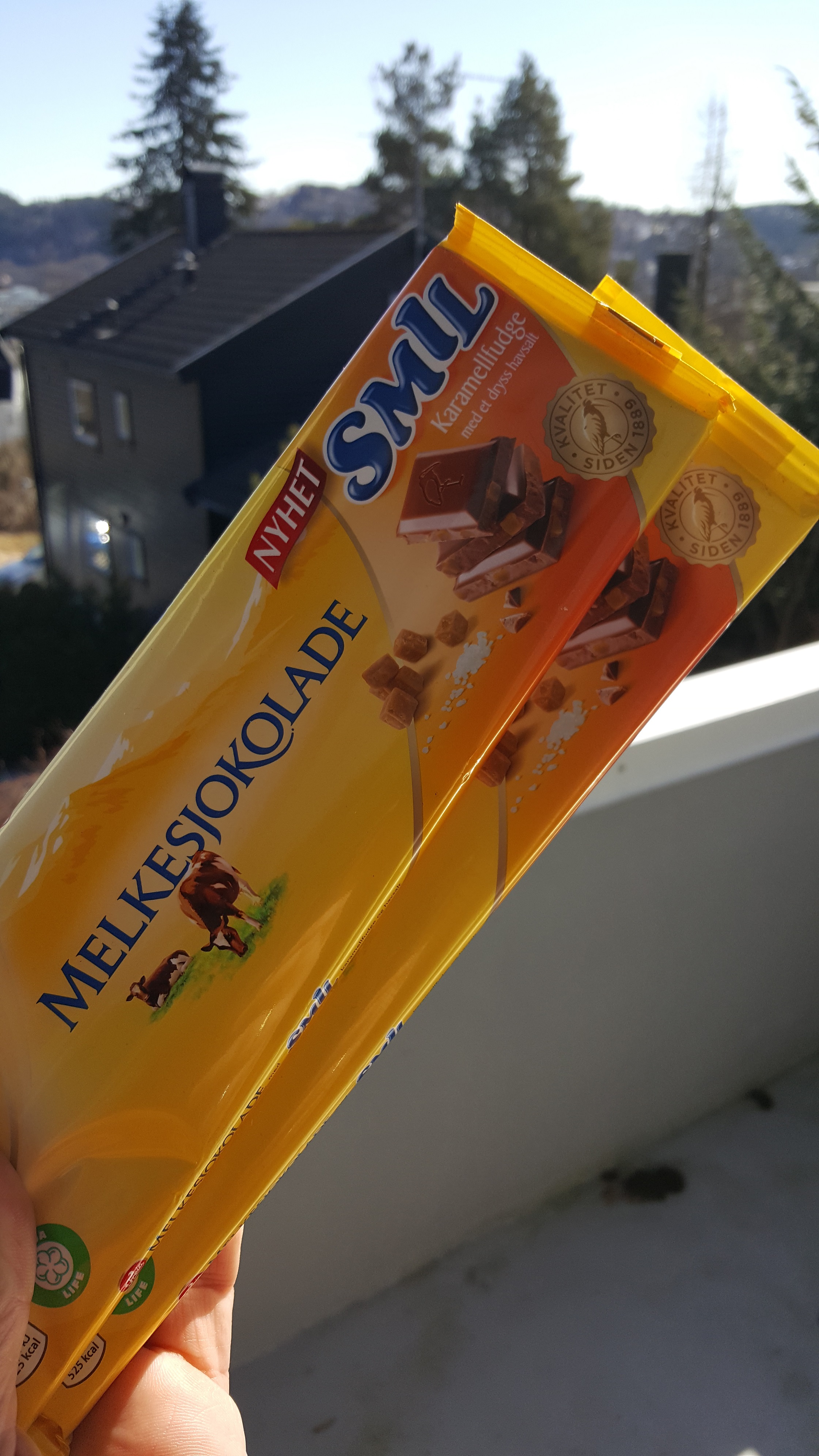 And finally, the blue moon over the fortress.  "Blue moon of Fredriksten keep on shining": 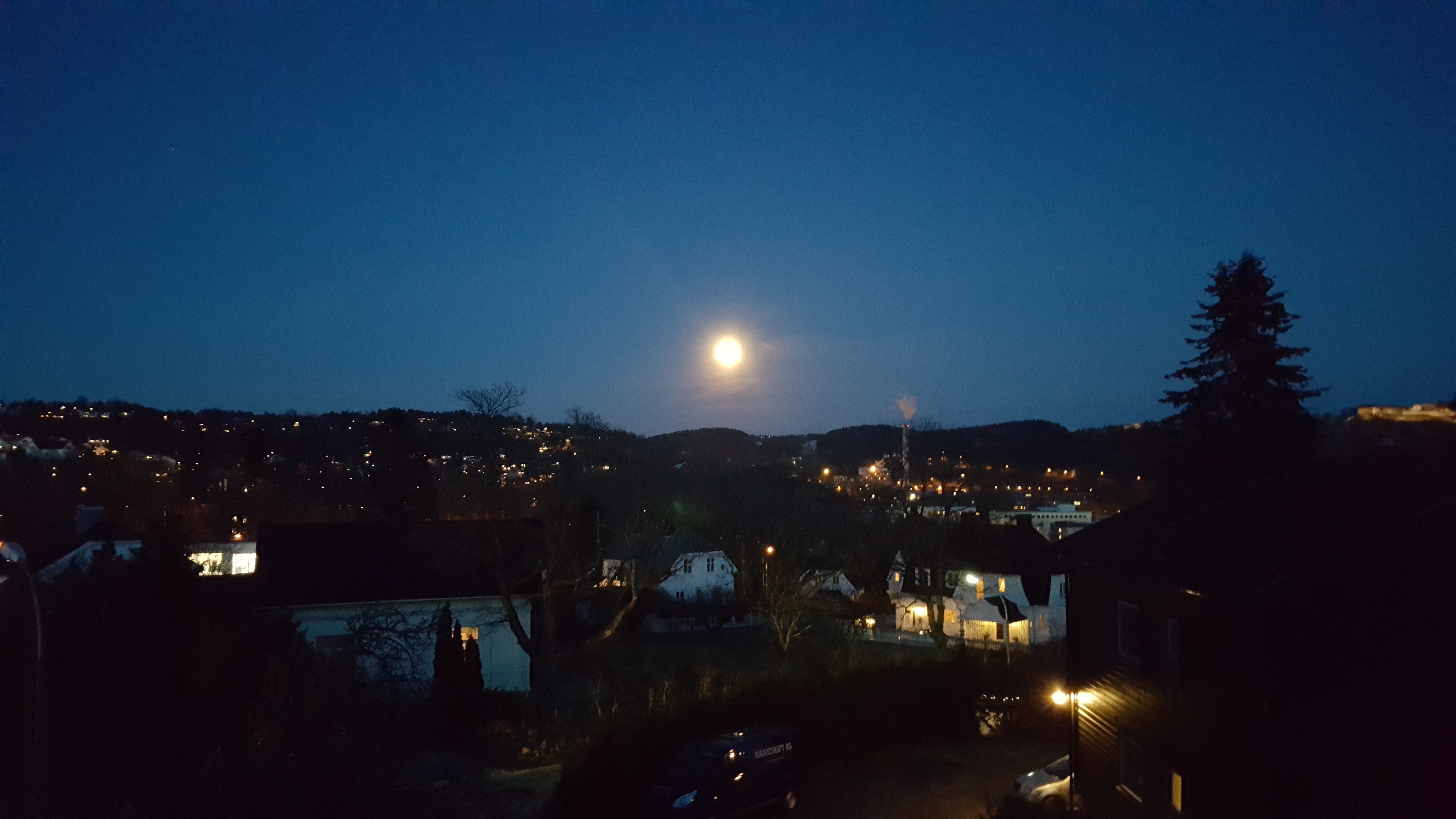 PS-If you ever want to know what it sort of feels like to pilot a rocket ship test drive a Tesla S and try the "Insane" and "Launch" modes together.  But don't eat lunch beforehand: 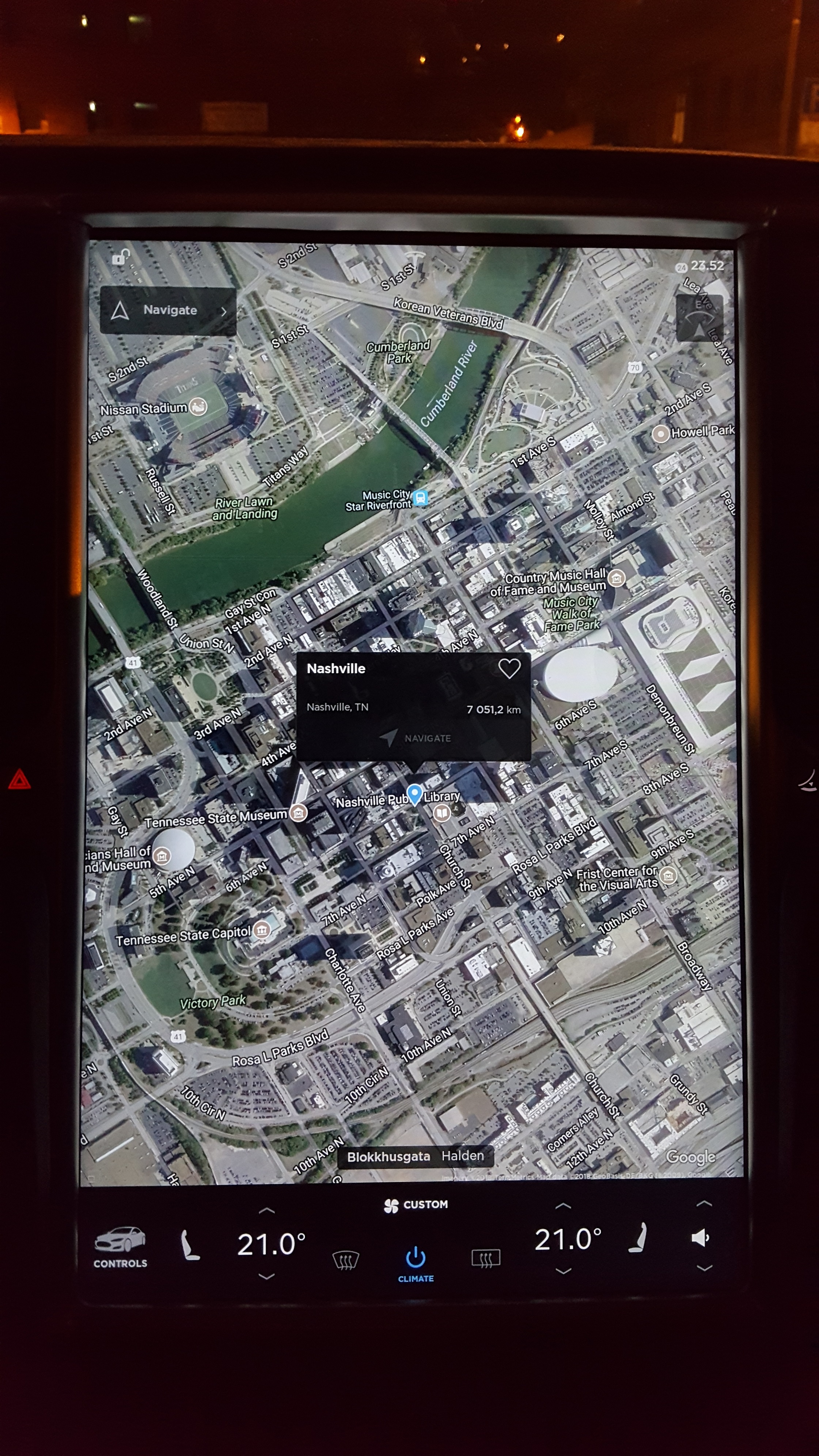 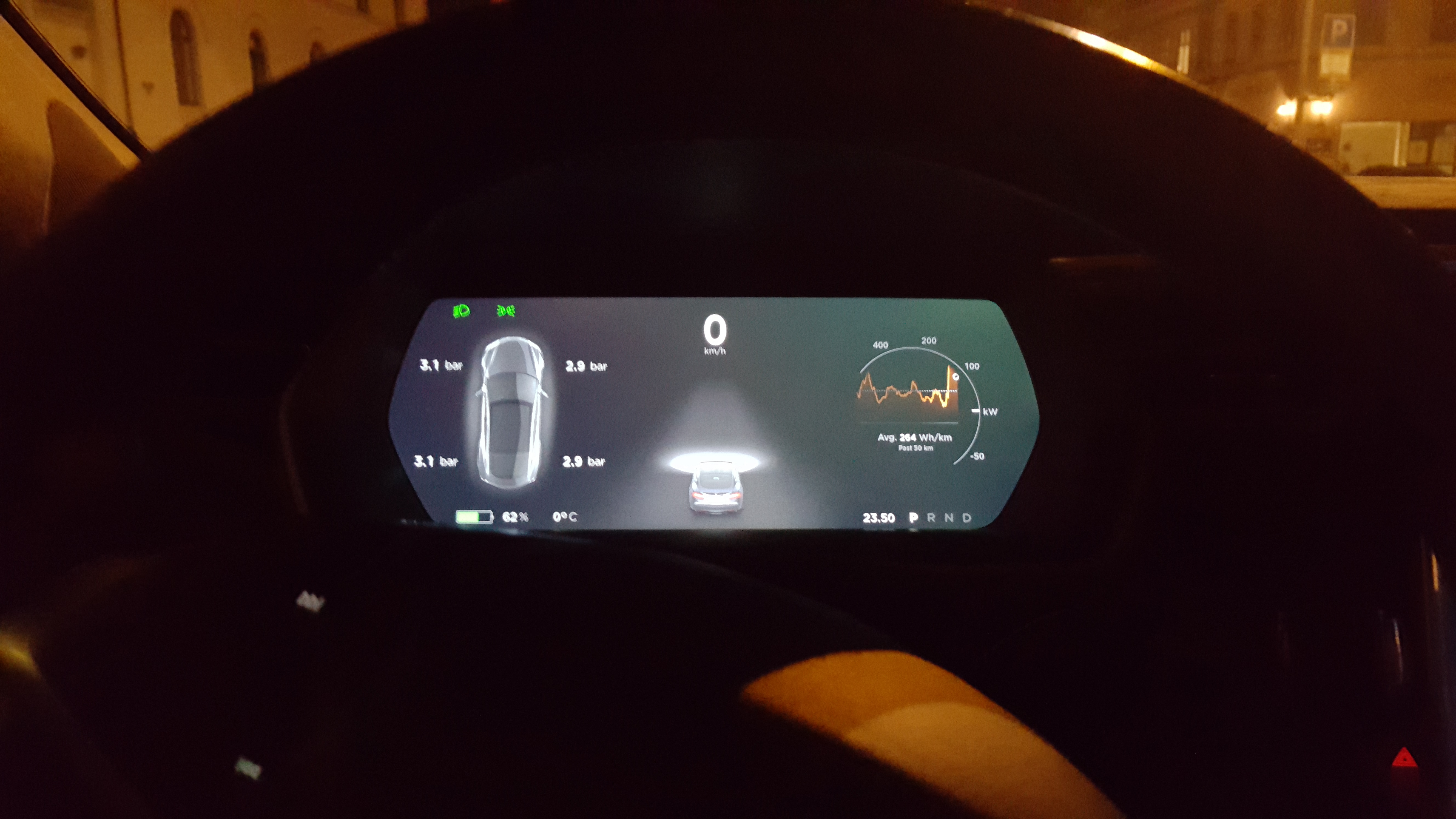 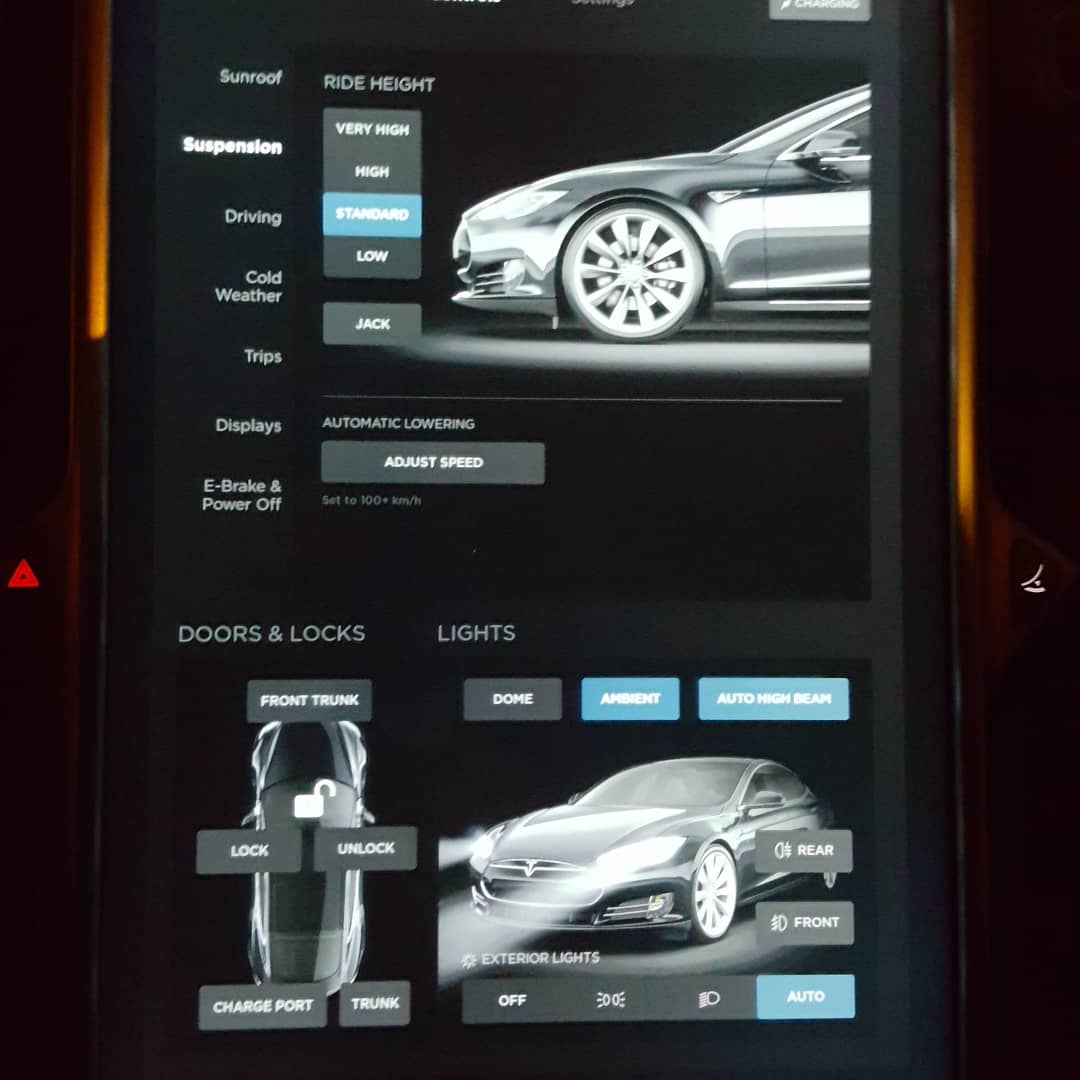